In this weeks edition we cover the drop in officer numbers to the lowest point since 1985, the shock departure of the favourite to be Police Scotlands next chief constable and the growing number of deaths following police contact. Our feature articles include lessons from a pioneering project in offender rehabilitation, a look at the measures being introduced to combat the rising trend of acid attacks, and the new chair of the Association of Police and Crime Commissioners highlights the vital work his organisation has performed and sets out his priorities, including securing better funding. We also examine the learning from a missing person-turned-murder investigation, and in our cover feature, we explore whether the development of cashless transactions could lead to a decline in robberies. 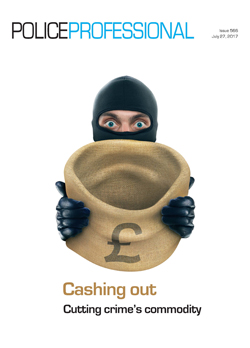 In this weeks edition we cover the drop in officer numbers to the lowest point since 1985, the shock departure of the favourite to be Police Scotlands next chief constable and the growing number of deaths following police contact. Features include: Putting a lid on acid Significant developments continue to be implemented following the sudden and high-profile increase in crimes using acid as a weapon, including suppliers of corrosive substances volunteering to restrict sales to young people. In pursuit of justice The newly-elected chair of the Association of Police and Crime Commissioners David Lloyd extolls the progress of police governance and says the case is being made to increase funding for policing and extend the influence of the organisations members. Processing the learning When new initiatives are introduced there is often significant insight gained from their implementation, so much so that knowledge acquired from the rollout of one West Midlands project is being examined to see if it can be applied more widely. Cashing out Could Swedens experience of moving to cashless transactions produce a similar startling reduction in robberies? Police Professional looks at the impact of removing physical money on crime. Proving a confession When a missing person investigation received a hearsay admission detectives had a huge task to secure a conviction for murder, and the end result was a lesson in the rules of advocacy and no comment interviews. To view the edition click here