In this weeks edition we have figures that show a reduction in child arrests, research revealing those found guilty of animal cruelty offences go on to commit serious offences and the Undercover Policing Inquiry has begun naming officers who infiltrated campaign groups. We have lots more news and features including Information Commissioner Elizabeth Denham advising forces on avoiding penalties as it will soon be able to fine organisations up to four per cent of their income for data breaches. We look at how information downloaded from pacemakers is achieving convictions in a number of crimes, we explore the debate on the use of robotic dolls in preventing or encouraging criminality by sex offenders, an unprecedented study reveals the sexual abuse of men by women is more widespread than first thought, and Richard Bennett explains how officers can develop neighbourhood policing through the College of Policings review. We also have the latest court decisions from Criminal Law Week. 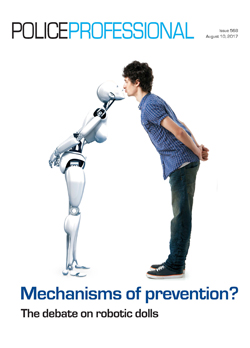 In this weeks edition we have figures that show a reduction in children being arrested, research revealing those found guilty of animal cruelty offences go on to commit serious offences and the Undercover Policing Inquiry has begun naming officers who infiltrated campaign groups. We have lots more news and features including: Staying secure Information Commissioner Elizabeth Denham looks at the issues around the disclosure and transfer of peoples personal data and explains why protecting personal information is a job for everyone. Contemporary neighbourhoods Following a recommendation made by Her Majestys Inspectorate of Constabulary (HMIC) the College of Policing has begun a major review of neighbourhood policing, which could have significant implications for the service. Richard Bennett explains how officers can contribute to developments. Mechanisms of prevention? As robotic dolls are set to hit the UK, Police Professional looks at the arguments for their use in preventing or encouraging criminality by sexual offenders who are able to play out their violent or illegal desires. Forced to penetrate For the first time research has revealed the impact of sexual abuse on male victims by female partners and the huge challenges officers face to recognise and investigate offending. The tell-tell heart Information contained on a pacemaker has helped determine a great deal about victims but there are a surprising number of legal cases emerging where an offender has been trapped by what their coronary assistant has told investigators. Criminal Law Week Round-up of new developments regarding offences, police powers and the rules of procedure and evidence. To view the edition click here