Vietnamese slavery victims are being wrongly criminalised by police as their abusers become more sophisticated, research has revealed 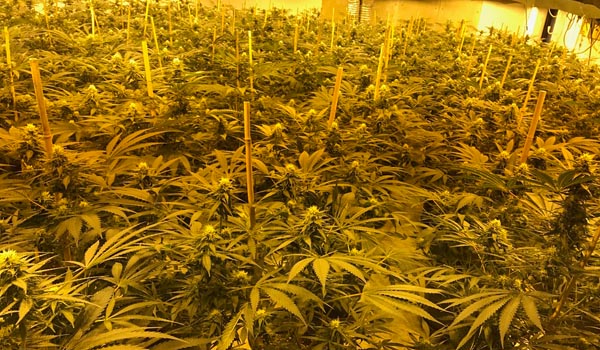 Vietnamese slavery victims are being wrongly criminalised by police as their abusers become more sophisticated, research has revealed Hundreds of Vietnamese nationals are being smuggled into the UK for a life of forced labour, according to the Independent Anti-Slavery Commissioner. The vast majority of victims are forced to work on cannabis farms, where they may be locked away and being beaten before they are eventually discovered. However, the report, published on Monday (September 11), found many victims are being arrested and prosecuted for their part in drug cultivation despite legislation advising against this. It added that many cannabis farmers have become more sophisticated and are now using heat blocking materials and renting properties from rogue landlords to avoid detection. A total of 1,747 Vietnamese nationals were referred to the National Referral Mechanism (NRM) between 2009 and 2016. In 2016, 519 Vietnamese victims were identified  the second highest figure of all ethnic groups. This number has increased year-on-year, with a large spike in 2014/15, when the number of NRM submissions rose from 217 to 481. The report found 70 per cent were trafficked for labour exploitation  particularly cannabis cultivation  although 21 per cent were sexually exploited. Of the 198 people who received a positive conclusive grounds decision over the period, 115 were forced to farm cannabis. However, rising property costs and the risk of being caught are causing a gradual decline in Vietnamese involvement in the London cannabis market. In February, Wiltshire Police arrested six men after discovering an enormous cannabis farm hidden inside a disused nuclear bunker. Three men  Martin Fillery, Plamen Nguyen and Ross Winter  were quickly identified as the ringleaders and were jailed in August. The other three, Vietnamese teenagers of no fixed abode, were taken into custody but later released after they were found to be victims of slavery. Speaking at the time, Detective Inspector Paul Franklin said the men had been very fearful and apprehensive when they were arrested. In February 2016, a Vietnamese orphan who had been jailed after being caught tending a Wirral cannabis farm had his conviction quashed when he was found to be a victim of modern slavery. The victim had been brought to the UK by a Chinese drug gang as a child and was forced to work in a restaurant in Kent before becoming a drug farmer. The research also shone a light on the methods used by people smugglers to bring their victims into the UK. It found Vietnamese migrants are often smuggled by people of their own nationality, who provide safe houses and control the route across Europe. Alongside offering victims a better life and new jobs in the UK, some slavers resort to more violent means; 72 per cent of victims whose NRM files were analysed said they had been approached or kidnapped by traffickers. Another 31 said they had experienced modern slavery en route to the UK. France was identified as a key transit country, with victims frequently staying in camps there before being taken across the Channel. The commissioners office has now asked the National Police Chiefs Council to draw up guidelines on cannabis cultivations harm and diverting victims away from the criminal justice system. It also recommended developing contacts within Vietnamese communities and routinely recording raids on nail bars and cannabis farms. Meanwhile, research by universities in Sheffield and Bristol has found many employers are at risk of using forced labour because they are not checking their staffs backgrounds. The study said companies have little hope of detecting modern slavery unless they adopt a new approach that lets them trace their employees origins as easily as they can for products. Sarah Newton, Minister for Crime, Safeguarding and Vulnerability, said: We are committed to working with business to tackle this hidden crime.