Examining the effectiveness of tactics and learning about what works in policing provided the impetus to the career of Alex Marshall, who tells Police Professional about the importance of training and development to everyone in policing. 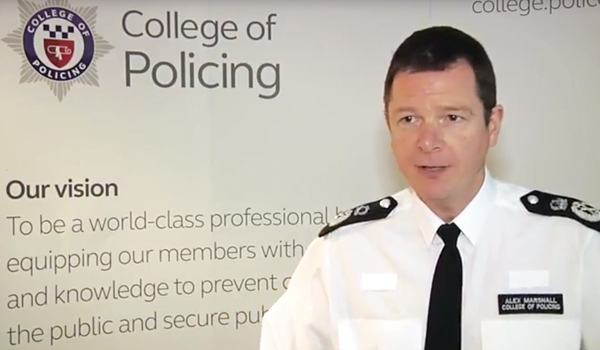 On joining the Metropolitan Police Service in 1980, Alex Marshall was following a family tradition and thought that he would be lucky to make the rank of inspector, he never imagined he would rise to become a chief constable and lead the most dramatic reforms to recruitment, training and research in policing as the first chief executive of the College of Policing. As he is about to retire, he recognises how being offered the opportunity to consider what practices were effective changed his career. Since its inception in 2012, the college has played a vital role in encouraging officers to learn new skills and question the validity of common approaches to crime. Through bespoke training packages, new authorised professional practice and with the future requirement for all officers to have degree-level educations, the police workforce is now developing in a way that was not previously thought possible. With his great-grandfather and grandfather having both served with the MPS, Mr Marshall always knew he wanted to follow in their footsteps. However, at the time he joined the force he was not particularly concerned with professional development. It was only after 17 years in the MPS that Mr Marshall first realised the potential benefits officers could gain by conducting research; following a three-month course at the University of Oxfords Wolfson College, he began to see how that some of the techniques being used to tackle crime were not as effective as they could be. For example, at a time of high burglary, street robbery and car crime, it gave me the opportunity to think about whether we were doing the right thing, what actually succeeds, and if we were simply putting off making a difference, he said. It was probably the first time I had the opportunity to stop and think about the approaches we take in policing and the reasons why we take them. Is it just because thats the way weve always dealt with burglary, or is it really the best way of stopping burglaries from happening? That was the thing for me  to come off the constant treadmill of exciting, busy MPS life in London, which was fantastic and I loved it  and to think a bit about the approaches that we take and what might actually prevent things happening rather than just dealing with them after the fact. Until recently, police research was dominated by academics. However, these studies struggled to engage with frontline officers. Those working in policing typically regarded researchers as detached and distant, and often argued against proposed techniques that seemed to oppose what they had learnt from a career of operational experience. Concerted efforts by organisations like the college are slowly changing this perception. Professor Lawrence Sherman, widely recognised as the godfather of evidence-based policing, describes the current research landscape as dominated by pracademics, ie, police practitioners who are increasingly taking it on themselves to conduct their own experiments and contribute to their forces knowledge about what techniques work. Mr Marshall believes this culture shift can be observed in engagement with the colleges bursary scheme. Launched in September 2016, the programme provides officers and staff with a share of almost £90,000 to help them meet the costs of further education. With two rounds of applications opened since then, hundreds of people from across the country have applied for financial support as they pursue part-time studies to learn more about the issues they deal with every day while working on the front line. The way that leaders are trained is also evolving. A common perception throughout policings history is that officers have to work their way up the rank structure to fully understand the challenges faced in the service. Following the introduction of schemes such as Direct Entry, this is no longer the case; people can join as an inspector or superintendent, and the Home Office plans to expand the programme to chief officer level. Like many officers, Mr Marshalls initial