Unlucky 13: Wanted man brings dozen doughnuts and one bagel to his `surrender party`

A man who turned himself in after losing a Facebook `bet` with police has been jailed. 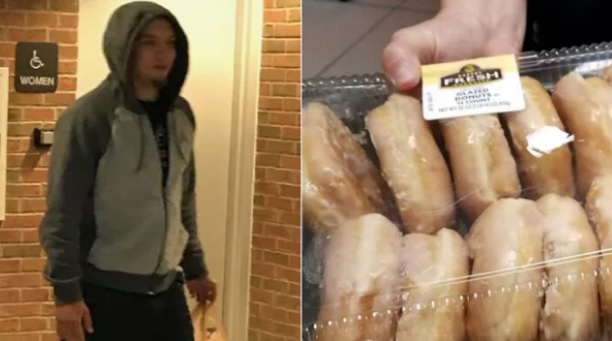 A man who turned himself in after losing a Facebook `bet` with police has been jailed. Michael Zaydel had promised to hand himself over to Michigan officers if a Facebook post about an existing arrest warrant received more than 1,000 shares. The 21-year-old even promised to bring Redford Township Police Department (RTPD) officers a dozen doughnuts if they were successful in the challenge. Im not worried about it, he wrote. If your next post gets 1,000 shares Ill turn myself in with a dozen doughnuts and thats a promise. And Ill pick up every piece of litter around your public schools. In a follow-up post, the department said he may or may not be a man of his word, adding, it is our experience everyone gets caught at some point. He has drawn a lot of attention to himself, and that makes it hard to hide from reality. The man eventually surrendered himself to officers, and true to his word arrived at the local police station with doughnuts and a bagel. Zaydel made good on his promise to turn himself in for his outstanding warrants, a RTPD spokesperson said. He walked in on his own, and not only did he bring the doughnuts, he brought one bagel! We would again like to express our gratitude for the support of all who followed this, shared it, and left us positive feedback. Zaydel was sentenced to 39 days in jail after pleading guilty to breaking the terms of his probation.