Understanding how to report and demonstrate how well law enforcement agencies are doing is a continuous challenge, however, a number are looking to New Orleans where wider community issues and concerns have replaced traditional crime measures and have provided a boost to public satisfaction. 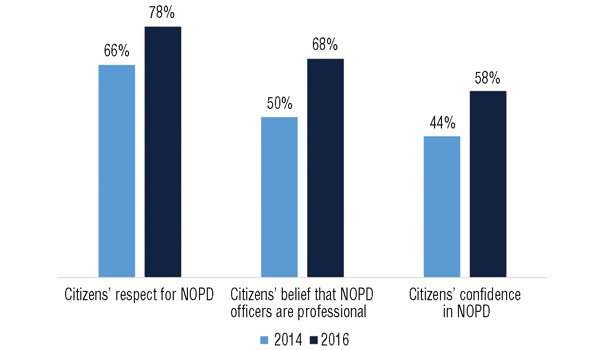 Management Analytics for Excellence (MAX) is a new model for data-driven performance management. Developed by the New Orleans Police Department (NOPD) it is now being examined by a host of law enforcement agencies worldwide following its implementation over the past 18 months. The NOPD claims it has led to huge improvements in transparency across a wide range of issues relevant to the public, while also impacting on crime. This has been demonstrated in a positive turn in community perception since 2014. The model has a strong focus on addressing community needs, in contrast to other management systems, such as CompStat, that focus heavily on the reduction of crime. Furthermore, the way MAX works means that data published and available to the public is no later than a week old, allowing improvements to be made on up-to-date information and making it of much greater value to the community. Police Professional examines how the reforms were established and what the UK could learn from the model. In 2010, the NOPD was investigated following accusations of misconduct. This led to the formation of a consent decree, a legally-binding agreement with the US Department of Justice (DoJ) to initiate reforms within the department. Consent decrees document and regulate improvements in public bodies, operating as a blueprint for change and often take years to completely implement. At first, the NOPD struggled to tackle the vast number of requirements (492, as well as many more sub-requirements). However, it began noticing its first significant improvements when it started using pre-emptive techniques for audits. Monitors developed audit checklists to quantify the reforms laid out in the consent decree. These checklists were replicated by the NOPD and handed out to supervisors, with easy to understand annotations, prior to each audit. With the supervisors knowing in advance exactly what was expected of them, it was no surprise when the department began seeing improvements. The NOPD also developed individual scorecards for body-worn video (BWV) cameras. These scorecards were published and allowed management to identify units that were not meeting expectations. Before the scorecards were introduced, BWV was being used in only 85 per cent of the cases where they were required. This rose to 96 per cent two months later, and increased consistently in all subsequent reviews. This confirmed that frequently measuring what you want to manage and holding leadership accountable reaps visible improvements. The same model was replicated for other practices and had the same results. The Compliance Bureau published the results, and supervisors were then able to see what areas needed improvement. This combined system of published data then transformed into MAX and the adage you manage what you measure. MAX was designed to replace the CompStat model of performance management and achieve a number of added benefits: provide supervisors with instant and constant feedback on how well they were complying with the consent decree; allow the monitors to quickly and easily assess whether the NOPD leadership was complying with the decrees and identify the areas in which it was struggling; allow the monitors to advise the NOPD on how to continue reaping improvements well beyond the requirements in the consent decree; and develop the departments transparency, allowing the community to participate in the reform process. The public is now able to access MAX data by visiting the departments website MAX comprises four data components: 1)Key performance data dashboard spanning all of the departmental operations. This includes: calls for service, crime, clearance rates, District Attorney acceptance or refusal rates, personnel data, misconduct trends and measurements, uses of force and community policing; 2)Interactive ArcGIS maps that visually detail crime and police efforts. This enables users to locate crime hot-spots and policing ac