Trackers should be fitted to all motorbikes to help target ‘reckless riders’, says PCC

Northumbria’s police and crime commissioner wants ‘trackers’ to be fitted to all motorcycles to help tackle the problem of bike-related anti-social behaviour. 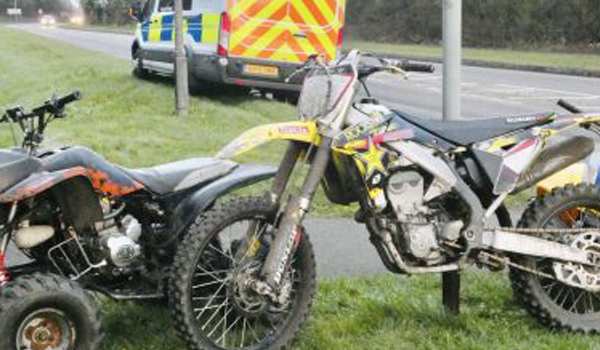 Kim McGuinness is calling on Government to “urgently introduce” new bike laws that would make their use compulsory and act as a “real deterrent” to reckless riders.

She believes the trackers would be an “impactful tool” in the fight against bike crime and would help prevent both thefts and anti-social behaviour.

Ms McGuinness is urging Policing Minister Kit Malthouse to give the green light to allow for tracker devices to be fitted to all motorbikes so their whereabouts and speed can be monitored – a move she says would deter would-be criminals.

“There have been some positive results lately but I want us to be able to do more,” she added.

“We need to think differently if we are going to put a stop to the problem once and for all and this is where trackers could come in. Our police are confident they could make a real difference.”

“I’m hearing from residents that reckless riding is happening far too often and it’s happening in our parks and residential streets – the very places where people are enjoying walks and families are playing,” said Ms McGuinness. “These are things people should be able to do safely – they shouldn’t have to worry about off-road bikes speeding by and ramping up pavements.”

However, she added: “It’s important for me to be clear, I don’t mean our law-abiding bikers here – I’m talking about trouble-makers, often young people riding un-roadworthy bikes, which in some cases have been stolen.

“It’s their own safety that is at risk here too – worryingly there’s a real lack of awareness of the consequences. A tough approach needs to be taken and I fully back our force with this, especially when engagement and education isn’t getting through to those responsible.

“But what I really want is to go a step further and I believe trackers would be a real deterrent. There is a growing sense of momentum in our region to put a stop to this problem. I want to build on this and think government support to make trackers a real possibility would be a good place to start.”

Councillor Ernest Gibson, lead member for Area Management and Community Safety at South Tyneside Council, said: “This type of anti-social behaviour continues to be a real concern for us in South Tyneside where we have seen these off-road bikes being ridden recklessly through our residential areas and churning up our green spaces.

“This not only affects the quality of life for our residents, but there is a danger that someone will get hurt, whether that is a member of the public or the rider themselves.

“Our parks and open spaces have proven to be valuable places for people to get their exercise over a very challenging year and we want them to be safe sites to visit. Any extra measures that can be put in place to tackle the issue of nuisance bikers would be greatly welcomed.”

Since August 2020, Northumbria Police has been running Operation Headlight on Wearside in a crackdown on vehicle-related criminality, including off-road riders, dangerous driving and motorbike-related thefts.

The force said officers have been alerted to a dozen incidents at Fulwell Quarry Nature Reserve in Sunderland this year alone involving riders “tearing around on motorbikes, committing crime and acting in an anti-social manner”.

Sergeant Sally College, of Northumbria Police, said: “Through Operation Headlight, which we are running in partnership with Sunderland City Council, we will continue to take robust action against those riding around in this illegal and dangerous manner.

“They are not only putting their own lives in danger, but others too – and last summer a rider was jailed for colliding with a 16-year-old boy at Fulwell Quarry, who was left with serious leg injuries.

“Another suspected rider has just been served with a summons to attend court and answer charges of dangerous driving.”

She is urging anyone who knows where these bikes are being stored overnight to report it to the force.