Around £150,000 worth of fake remembrance poppy souvenirs have been seized at the border. 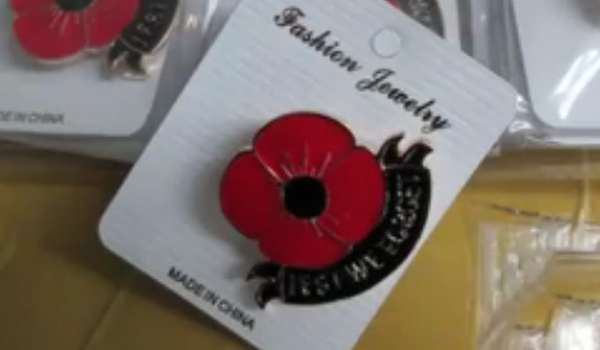 Around £150,000 worth of fake remembrance poppy souvenirs have been seized at the border. Thousands of scarves, keyrings and pins branded with the words lest we forget were discovered by Border Force officers at Tilbury Docks on Wednesday (November 8). The counterfeits  which deliberately mimicked designs by the Royal British Legion and Poppyscotland  had been shipped from China and were destined for an address in Manchester. They have now been confirmed to have infringed the copyright held by both charities. Mark Kennedy, acting deputy director of the Border Force, said: Had these fake goods entered the market, they could have cheated thousands of pounds from unsuspecting members of the public and diverted vital funds away from the Royal British Legion. My officers work around the clock at ports, airports and mail sorting centres identifying and seizing counterfeit goods and their diligence has proved vital here. All counterfeits cheat honest traders and we are determined to crack down on this type of criminality. Border Force also works closely with partner law enforcement agencies to ensure co-ordinated action against those who attempt to import fake goods.