Monday’s funeral of Queen Elizabeth II marked the “final and most complex phase” of what is regarded as the biggest policing and security operation the UK has ever seen. 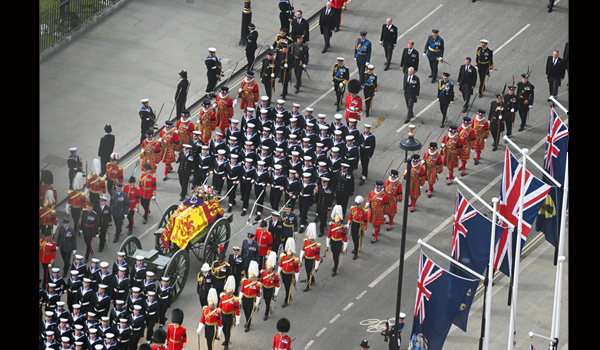 The State Gun Carriage carrying the coffin of Queen Elizabeth II, draped in the Royal Standard with the Imperial State Crown and the Sovereign’s orb and sceptre, as it leaves Westminster Abbey after the State Funeral. Picture: UK Parliament/Jessica Taylor/PA Media.

Metropolitan Police Service (MPS) Deputy Assistant Commissioner Stuart Cundy said nothing could compare with the “hugely complex” task, describing it as the “largest policing operation in the Met’s history”.

Monday signalled the “final and most complex phase” of the operation after the death of the monarch, he said.

Thousands lined the route as The Queen’s coffin was first taken to Westminster Abbey for the State Funeral before a procession to Wellington Arch, where it was taken to Windsor Castle for the Committal Service.

The MPS said although it was a period of sadness, it was “honoured and privileged to be a part of history”.

Commissioner Sir Mark Rowley said the number of officers likely to have been deployed during the operation reached a point where it was “well beyond the total size of a force like West Midlands or Greater Manchester”.

He said police officers from around the country had “relished the opportunity” to help support The Queen’s funeral.

More than 3,000 officers from almost every force in the country were helping police in London.

In a statement, the MPS said: “The State Funeral of Her Majesty The Queen is the largest single policing event that the Met Police has ever undertaken.

“Although this is a period of sadness, we are honoured and privileged to be a part of history.”

The MPS said it 231 coaches were deployed to transport officers during the operation, with a further 250 coach trips up to and including the day of The Queen’s funeral;

Almost 500 extra vehicles were also deployed to numerous parts of the MPS, while 24,000 barriers (covering some 36km), 5,000 cones and 1,630 signs were put in place  to control crowds and keep key areas secure.

The MPS said the funeral was the climax of “well-rehearsed policing plans initiated across the capital” alongside British Transport Police (BTP) and City of London Police.

It was also the largest global protection operation dealt with by the force, with world leaders, dignitaries and other VIPs attending the State Funeral.

Around 2,300 police officers were in place to oversee the Queen’s final journey from Westminster Abbey to Windsor Castle.

About a thousand lined the route, alongside military personnel, from the Abbey to Wellington Arch while the Queen’s coffin was carried from the service by gun carriage.

There was also a considerable police presence in Windsor ahead of the Queen’s committal later in the day.

Thames Valley Police said it had been one of “the largest operations undertaken by the force”.

A total of 2,000 police officers from Thames Valley Police and 28 other forces from the UK offering mutual aid worked in the town on Monday.

In a statement, the force said: “Some of the specialist police units involved in the overall operation have been: roads policing, Special Escort Group, mounted, marine, firearms, neighbourhood and the National Police Air Service.

“The force would like to thank local residents, businesses and visitors, including the 100,000 crowd that attended the town today, for their support and cooperation.

“It has been a privilege for Thames Valley Police to fulfil our final duty to Her Majesty and enable a safe and dignified event as she is laid to rest in St Georges Chapel Windsor.”

A group of Thames Valley Police officers also had the distinction of being part of the Guard of Honour in Windsor at Monday’s committal service for Her Majesty the Queen.

The force said: “The Guard of Honour will form before the procession carrying her Majesty, which will enter the grounds of Windsor Castle. The Committal Service of Her Majesty the Queen will be one of the largest operations in the history of Thames Valley Police, which has a longstanding role in the policing of Royal events.”

Thames Valley police and crime commissioner Matthew Barber said: “The funeral of Her Majesty The Queen was a sad and moving occasion. It was also an opportunity to remember and celebrate the longevity of her reign and positive presence over so many years.

“I would like to thank Thames Valley Police and officers from supporting forces for their role in policing the Committal Service in Windsor, which took place after the funeral, helping to ensure the security and safety of members of the public who came to pay their respects.

“Our thoughts remain with the Royal family in their grief and as we welcome our new King.”

In a statement issued on the day of the funeral, the Police Federation of England and Wales (PFEW) said: “Today, the nation and our members across England and Wales say a final goodbye to Her Majesty The Queen, as she is laid to rest.

“Our heartfelt condolences and thoughts remain with The Royal Family at this difficult time. As loyal servants of the Crown, we mourn the loss of Her Majesty alongside the many people who admired her.

“Her devotion to duty is an example to us all and we celebrate her extraordinary life of service.

“At PFEW we offer our sincere thanks and gratitude to the police officers who have worked tirelessly throughout the national mourning period and on this sad day. Their professionalism and sense of public duty has shone through.

British Transport Police said: “It’s been an honour to serve our final duty to Her Majesty the Queen today. We’ve seen thousands of people from across the world travel safely to pay their respects.

“A day which we will never forget.”

The Police Superintendents’ Association said: “We join with communities across the nation and the world today, to give thanks for the life and incredible service of Her Majesty the Queen. Her legacy will never be forgotten. Our thoughts and deepest sympathies remain with the Royal Family.”

The Home Office Tweeted: “To our exceptional police and security services who’ve worked tirelessly throughout this period, thank you for keeping the public safe while they paid their final respects.”

Chief Constable Andy Marsh, chief executive of the College of Policing, shared some personal reflections on the eve of Her Majesty The Queen’s funeral.

He said: “Police officers from across the country are in London, supporting the funeral of Her Majesty The Queen, our longest serving monarch whom they – along with every other officer including me – took an oath to serve. While they are there first and foremost to ensure the safety and security of the public, they will no doubt be paying their own personal respects.

“For over 70 years, Her Majesty The Queen has been a significant figure for policing in whose name countless acts of justice have been carried out, and law and order maintained. This is a momentous time for the police in which we will remember our monarch as the incredible leader she was, a true Queen of the people.

“I had the honour of meeting the Queen as chief constable in Avon and Somerset when she came to name Windsor, a new police horse. My fond memory is how Windsor would not leave her handbag alone and she confided in me that she had a tube of polos that he had sniffed out and asked if she could give him one. She was a truly remarkable woman who always put everyone at ease.

“As we enter the new era of King Charles III, all officers will recommit themselves to delivering a policing service that the public trusts to carry out the work of the Crown with integrity and fairness to keep them safe.”

The MPS said as of 5pm on Monday, 67 arrests had been made as part of the policing operation for a range of offences.