This morning (November 7) professional bodies for teaching, medicine and policing signed a declaration that commits them to promote and use evidence to improve outcomes. Its author, Professor Jonathan Shepherd, explains why this commitment is so important. 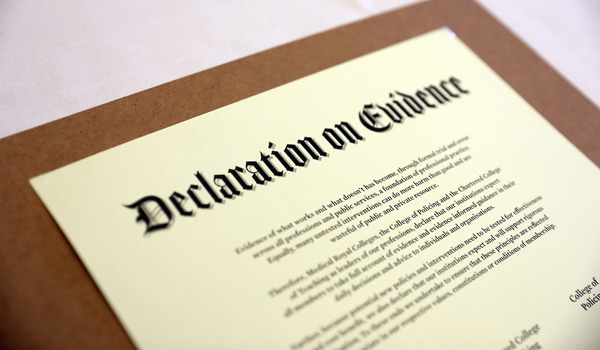 This morning (November 7) professional bodies for teaching, medicine and policing signed a declaration that commits them to promote and use evidence to improve outcomes. Its author, Professor Jonathan Shepherd, explains why this commitment is so important. Imagine the scene one morning on the school run. Your adolescent son announces he has an important history test today. Why did you not tell us? Why were we not told? We could have made sure you went to bed earlier/helped you prepare. And would it not it have been helpful if the school had texted you at the beginning of the week about this? The answer is yes, it almost certainly would have. A trial of texting such information to parents showed students progress could be measurably accelerated. And imagine the scene in your local police station on Friday night when street patrols are being briefed about the latest trouble spots. Police knowledge of these depends on people reporting offences  but many are not reported. Gang members, for instance, or people who go out with knives in their belts, are not exactly lining up to provide this information. Helpfully though, there is information on violence locations available at your local accident and emergency department  collected from the injured. Does this NHS information make a difference? The evidence shows it does; serious violence went down 42 per cent more in Cardiff, where this information was included in police briefings, compared to similar cities where it was not. You wake up one morning with a sore knee. It gets worse, not locked just painful. You visit your GP. A scan is ordered. It shows a torn cartilage. You need to get the torn bits removed, or the knee joint washed out, you think? What do the trials show; does this make things better? No, it turns out. The National Institute for Health and Care Excellence (NICE) advises that referral for arthroscopic washout should not be offered as part of treatment for osteoarthritis, unless the person has knee osteoarthritis with a clear history of mechanical locking (not giving way or X-ray signs of fragments). The potential risks of the procedure, NICE concluded from the evidence, outweigh any possible short-term benefit  aside from rare complications, it can take weeks for people to fully recover from arthroscopy. Pain, swelling and difficulty putting weight on the leg are common. Evidence is crucial in all public services. Without it, and without the careful combination of information from all reliable sources, those who advise us cannot give us the advice we need. Our taxes are wasted too. Fake news about current affairs is bad enough, but evidence-lite advice about the way our children can succeed at school, or how our city is policed, or how our aches and pains are best managed is quite another. This precious commodity of evidence is rather like oil. It needs to be generated, then refined, and pumped through to us all in usable form, so it is there when we need it. We need to be critical too  being able to quiz our GP, or young Joanne or Benjamins maths teacher about what is best is just as important as quizzing the surveyor about a potential new house. There has been a revolution here. It was only in 2000 that the then National Institute for Clinical Excellence  now NICE  was established to winnow evidence and publish authoritative guidance. The NHS is bound to take account of this. From 2012, similar bodies have been formed to guide education, crime prevention, local economic growth and other sectors. Astonishingly, until the What Works Council was formed, there was no forum where expertise about evidence could be shared between say, the NHS and education. The generation of quality evidence has also been boosted. The Education Endowment Foundation has trialled more than a hundred education policies and practices since it was founded in 2011. New police research institutes in Wales, England and Scotland are pumping out evidence about what works and what does not in policing. Collaborations between forces and universities ha