Terror groups plans thwarted after being hired by undercover officers

Terrorists who named themselves the Three Musketeers have been sentenced to life imprisonment for planning an attack on a UK military target or police officer following one of the most complex terror investigations in years. 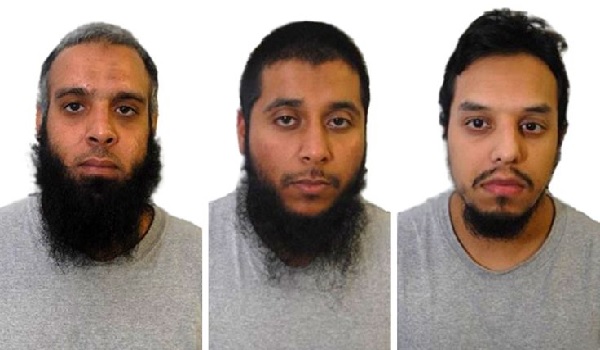 Terrorists who named themselves the Three Musketeers have been sentenced to life imprisonment for planning an attack on a UK military target or police officer following one of the most complex terror investigations in years. Naweed Ali, 29, and Khobaib Hussain, 25, from Birmingham and Mohibur Rahman, 33, from Stoke-on-Trent, were convicted at the Old Bailey on Wednesday (August 2) following a four-month trial. A fourth man, Tahir Aziz, 38, from Stoke-on-Trent, was also found guilty. On Thursday, the four men were sentenced to life imprisonment at the same court. Sentencing, Old Bailey judge Mr Justice Globe said the men had been gripped by a “long-standing, radical, violent ideology”. The men were caught after undercover officers set up a fake courier company firm called Hero Couriers, with a logo, a uniform and premises in central Birmingham, and offered to employ neighbours Hussain and Ali for driving shifts. They were all committed to carrying out a mass casualty attack, and officers said the case was one of the most complex counter terrorism investigations in a number of years. The four-month trial was held mostly in secret for national security reasons, and following the Westminster terror attack on March 22 it was adjourned until the following week. The court heard how the members of the gang called themselves the Three Musketeers while exchanging encrypted messages via the Telegram app, and planned a Lee Rigby-style attack. As Ali arrived for his first shift with Hero Couriers in August last year, he left his Seat Leon car at the Birmingham depot, where MI5 officers searched the vehicle with a view to putting microphones inside. However, a bag of weapons, including a pipe bomb and a meat cleaver with the word Kafir  meaning non-believer  scratched on the weapon were found under the drivers seat. An imitation firearm, cartridges, a 9mm bullet, latex gloves and industrial tape were also recovered. As a result of the search, the four men were all arrested on August 26. Following the arrests, officers found a samurai-style sword next to the drivers seat in Azizs Ford Fiesta. Further evidence found on their devices showed they had shared radical and extremist beliefs in messages. The defence claimed the weapons had been planted by an undercover officer named Vincent  who posed as the boss of the fake courier firm  and accused him of falsifying their notes. Giving evidence anonymously, the officer was cross-examined for 12 days and repeatedly rejected the allegations. Chief Superintendent Matt Ward, head of West Midlands Polices Counter Terrorism Unit, said the accusations were groundless. He added: They (the accusations) went against the integrity of the undercover operatives, they went against the integrity of the wider investigation. “What I would say is just because a defence lawyer says something in court, doesn`t make it true.” Ali and Hussain attempted to join an al-Qaeda camp in Pakistan in 2011, but when they arrived back in the UK the following year, they were arrested and the following year pleaded guilty to engaging in conduct in preparation of terrorist acts. The trial heard the pair met Rahman  who has previously been convicted of possessing an al-Qaeda magazine  while in prison. Rahman will also be sentenced for a further two offences after failing to notify police of a change of address under requirements of his sexual offences order and his Part 4 order under the Counter Terrorism Act 2008. Chief Supt Ward said: The fight against terrorism continues and this case was one of the most complex counter terrorism investigations in a number of years. “This is the second time three of these individuals have been convicted of terrorism offences after planning an attack. Although much work is being done in prisons and following the release of individuals it is clear that more needs to be done. “These are dangerous men who seem committed to carrying out an attack. The nature of this investigation d