Victims of the Clutha tragedy in which two Police Scotland officers died have reportedly been awarded £1.3m damages from the owners of the helicopter firm. 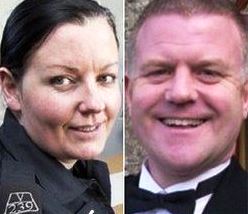 Victims of the Clutha tragedy in which two Police Scotland officers died have reportedly been awarded £1.3m damages from the owners of the helicopter firm. Solicitors for ten people injured in the crash said their cases had now been settled, helping them get their lives back on track. Lawyers said no amount of money could alter the life-changing events of November 29, 2013, when a police helicopter crashed onto the roof of the busy Clutha public house in Glasgow, killing ten people including Police Constables Tony Collins and Kirsty Nelis and force civilian pilot David Traill. The accident also claimed the lives of bar customers John McGarrigle, Mark OPrey, Gary Arthur, Colin Gibson, Robert Jenkins, Samuel McGhee and Joe Cusker. Another 31 were injured. Mark Gibson of Digby Brown Solicitors said: The Clutha tragedy was an unprecedented event that caused devastation for hundreds, if not thousands, of people across the country. But compensation does give these individuals the means so they can focus on recovering with their loved ones. To respect our clients privacy we will not discuss individual cases, however we can confirm our cases have now settled. Compensation claims were made to Babcock, which owns operators Bond Air Services, for post-traumatic stress, serious brain or spinal injuries. Irwin Mitchell Scotland, representing 16 others affected by the crash, said on October 20 that cases had settled for undisclosed amounts. David Bell from the legal firm said: The individual cases for those who were injured and the family members of those who sadly died have all now concluded and our clients are seeking to move on from this tragedy. But there is still more that can be done: we and our clients would still like to see a Fatal Accident Inquiry as soon as possible as we believe that there are more lessons to learn, both about the accident itself and its aftermath. One of the issues with this crash was the helicopter was not required to be fitted with a black box recorder which means vital data was not recorded. We think the regulations should be changed to ensure all smaller passenger aircraft are required to have black box recorders fitted. In 2014, solicitors representing Bond Air Services accepted responsibility for the losses of those affected by the incident. However, because the vehicle was not equipped with recording devices, it was impossible for investigators to establish the exact circumstances surrounding the incident, such as why no mayday call was sent out. The Air Accident Investigation Branch therefore recommended they were installed in future models.