Successful action, combined with new legislation and falling commodity prices, led to metal theft dropping down force priorities, however, as prices have risen and dealers find ways around the law, Police Professional asks whether forces have lost the skills to address the issue now it is on the rise again. 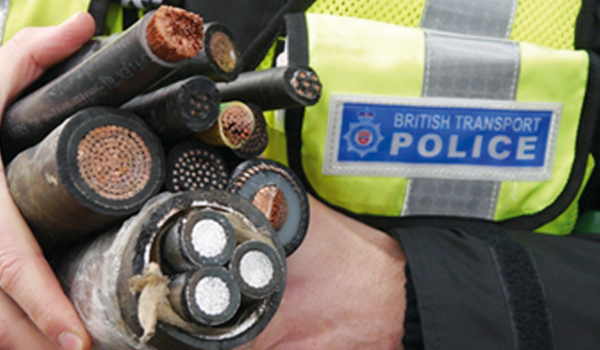 Successful action, combined with new legislation and falling commodity prices, led to metal theft dropping down force priorities, however, as prices have risen and dealers find ways around the law, Police Professional asks whether forces have lost the skills to address the issue now it is on the rise again. The threat posed by metal theft has drastically declined since the start of the decade. Around 2012, prior to the enactment of the Scrap Metal Dealers Act (SMDA), the criminal trade in metal was valued at around £220 million. The police response was appropriately strong; several volunteered to be part of the crackdown known as Operation Tornado, and the National Metal Theft Taskforce, which sat under British Transport Police (BTP), provided specialist support. These measures were undeniably effective. The most recent available statistics show that the number of metal thefts has fallen by around 75 per cent since the SMDA was enacted, reducing from 62,000 reported incidents a year to approximately 16,000 in 2015/16, while police recorded metal theft offences also declined to fewer than 13,000 in 2016/17. However, the numbers have recently started to rise again. Office for National Statistics figures show 3,684 incidents were recorded between January and March 2017  the most since 2015  compared to 3,015 in the previous quarter. The British Metals Recycling Association (BMRA), the trade organisation representing the UK recycling sector, also claims its members have experienced more metal theft and has expressed concerns about an apparent shift to a more organised model of offending. If this changing landscape is genuine, forces need to steel themselves for what could potentially once again become a significant issue. Scrapped priorities Chief Constable Paul Crowther, national lead for metal theft and heritage crime, does not agree that metal theft is dominated by major organised criminality. Most are low-level offences and carried out by small groups. However, industry reports that greater quantities of metal are now being taken in each incident, meaning the thefts are having a greater impact. The steep decline in metal theft since 2012 may also mask a significant level of underreporting, as the lower priority placed on the crime today means some victims think they are unlikely to receive a response. The numbers, in terms of offences, are not significant, said Robin Edwards, managing director of Onis Consulting and former deputy lead for the metal theft taskforce. But the thefts themselves are, and there is a greater degree of organisation. For example, there was recently an incident of lead theft in Surrey where they were not aware the lead was being stolen until the roof had fallen in. Whereas you would previously have had a little bit of cable taken, now you are having hundreds of meters of cable taken at a time. In part, the recent increase in offending may be due to fluctuations in metal prices. After the SMDA was introduced in 2013, the value of copper plummeted by more than 50 per cent, making it a much less attractive commodity. Since then, prices have begun rising again and are currently around £5,000 a tonne for copper after peaking at £6,000. Although the correlation between this increase in value and offending is not exact, thieves still stand to gain around £50 for each bag of copper cabling they can sell on. However, the decline in police enforcement following the loss of the National Metal Theft Taskforce has undoubtedly also had a significant impact. The metal theft unit was only ever intended to remain active until the SMDA had been thoroughly embedded. The support of a dedicated taskforce with ring-fenced resources proved invaluable at a time when metal theft was rampant; during its brief existence between 2011 and its disbandment in 2014, it secured more than 1,000 arrests and the seizure of around 600 vehicles linked to the crime. Unfortunately, its existence was dependent on both priority and resources. Following the success of the SMDA and t