Chief officers in Bedfordshire are set to provide a higher level of support to colleagues assaulted on duty under a new scheme inspired by the daughter of a murdered police constable. 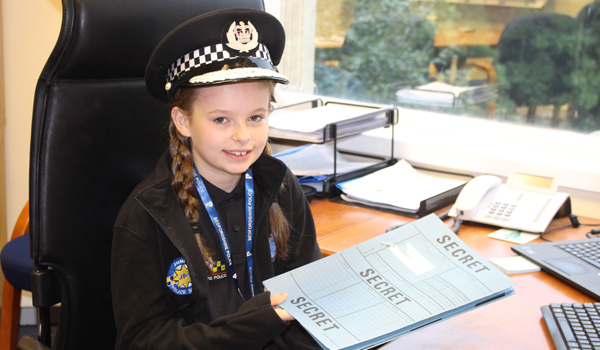 Chief officers in Bedfordshire are set to provide a higher level of support to colleagues assaulted on duty under a new scheme inspired by the daughter of a murdered police constable. Eleven-year-old Maggie Henry, whose father Jon was killed on duty in 2007, has lent her name to a Bedfordshire Police initiative to look after officers and staff. Maggies Law was finalised when she visited the forces HQ earlier this month and was formally launched on Thursday (August 17). The policy will ensure anyone who is assaulted while on duty will be contacted by a chief officer to check on their welfare and signpost them to necessary support. It will work alongside the forces seven-point plan, which commits to treating officers who are assaulted like any other victim of crime. Chief Constable Jon Boutcher said: Without question, an assault of any kind should never be considered part of the job. Our workforce walks into danger when others walk away and sadly verbal and physical assaults are becoming commonplace  but that doesnt mean it is acceptable. Our officers should be afforded the support they need and deserve. This means they are treated the same way as any other victim of crime, they feel valued and that those who attack police officers are not dealt with lightly. Use of force data published last month under a new national transparency scheme showed 59 Bedfordshire Police officers were injured while applying force between April and June. Another 31 were spat at and 26 were threatened with weapons. PC Henry was fatally stabbed in Luton in June 2007 when he responded to reports of a man attacking members of the public with a knife. His killer, Ikechukwu Tennyson Obih, was convicted of murder and sentenced to life imprisonment. Maggie said she wanted to help introduce the new policy to look after our police officers, so that they can look after everyone else. Police and Crime Commissioner Kathryn Holloway said: I never want another family in the county to experience what Maggie Henry and her family have had to go through. I have raised the issue of relatively low penalties for those who attack police officers within government and am about to raise this subject with the Crown Prosecution Service in Bedfordshire. In my view, an attack on a police officer is not the same as an assault on any other member of the public, since police are standing on the front line between those who keep the law and those who undermine it. An attack on a single officer is an assault on society itself and should be met with the toughest penalty possible.