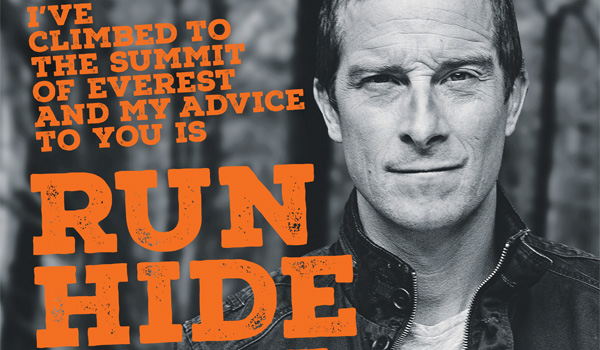 Counter-terror police have joined forces with celebrities to help keep young people safe from terror attacks. TV survivalist Bear Grylls and England football international Jamie Vardy are among those leading a new phase of the national Run, Hide, Tell campaign aimed at people aged 11-16. Previous efforts have been focused on adults, but the National Counter Terrorism Security Office believes age-appropriate messages will make it easier to engage with a younger audience. The campaign will have a particular focus on telling people not to film ongoing incidents on their phones and instead get to safety. Deputy Assistant Commissioner Lucy DOrsi, national lead for Protective Security, said: We appreciate that talking to young people about terrorism can be scary, for parents and children alike. But the atrocities in London and Manchester have sadly resulted in some of the youngest victims of terror this country has ever seen, and if we are able to teach children to act in a way which could potentially save their lives then it is our responsibility to do so. We are particularly concerned when we see people  young and old  using their mobiles to film scenes when they should be moving away from the danger. Mr Grylls said: Ive tackled some of the most dangerous environments on earth, but in the event of a terrorist attack there is only one thing I would advise: Run, Hide, Tell.