A police dog whose protection of his handler against an armed suspect led to sentencing changes for offences against law enforcement animals has collected a second national bravery award. 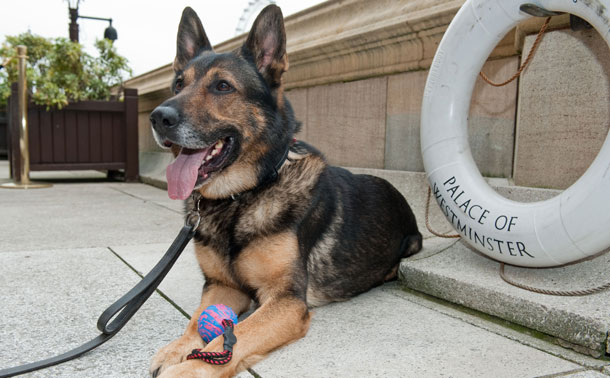 A police dog whose protection of his handler against an armed suspect led to sentencing changes for offences against law enforcement animals has collected a second national bravery award. PD Finn  left fighting for life after being stabbed while heroically chasing down a man armed with a 12 inch knife in Stevenage  has been named animal of the year at a ceremony at the House of Lords. The eight-year-old German Shepherd has added the International Fund for Animal Welfare (IFAW) award to the RSPCA`s Hero Animal of the Year honour he received from Star Trek actor Sir Patrick Stewart last month. At the Animal Action Award event on Tuesday (October 17), IFAW UK director Philip Mansbridge said Finn`s actions had shown him to be a remarkable dog and said his heroics showed the special relationships that can exist between dogs and people. PD Finn was brutally wounded in the chest and head with a combat knife as he and handler Police Constable Dave Wardell apprehended a 16-year-old criminal, stopping him from getting away over a garden wall last October. The dog, from the Bedfordshire, Cambridgeshire and Hertfordshire Police Dog Unit, was left close to death and only recovered after life saving surgery  the knife having narrowly missed a main artery. Giving evidence against the attacker at Stevenage Magistrates Court in May, PC Wardell broke down in tears as he described the youth pulling the biggest knife he had ever seen out of the chest of his beloved dog. He said: I knew we were in mortal danger. I thought: Hes just tried to kill my police dog, and the next thing is me. I thought: Weve got to do something about this now or were not going home. At that point I feared for my life and for Finns life. I was expecting Finn to die in front of me. Finn made an amazing recovery and was back patrolling the streets just after Christmas  before finally retiring in March this year. His 16-year-old attacker was convicted of actual bodily harm against PC Wardell, who had suffered a wound to his hand in the struggle, as well as causing criminal damage to Finn  and was jailed for four months. The discrepancy between the way injured humans and service animals are treated by the law inspired a campaign called #FinnForChange, calling on the government to rethink sentencing guidelines. A photograph of Finn`s stomach wound, held together with 30 stitches, prompted the online campaign  championed by PC Wardell. It became known as Finn`s Law and culminated in a parliamentary debate which led to stricter sentencing guidelines. Other recipients at the event included retired police officer Jim Ashley, 76, and wife Jude, 74, who have been volunteering with Shropshire Badger Group since the groups formation 30 years ago. They work to tackle badger crime and persecution, often being called out to incidents of cruelty and gathering evidence for criminal prosecutions. Another winner was Metropolitan Police Service (MPS) forensics technician Mark Moseley, 42. After being challenged by his two daughters to use his forensic skills to try to help threatened elephants, he spent two years of his own time developing an ivory fingerprinting kit to help MPS officers. The kits, which are now being funded and supported by IFAW, are being used on the ground to find and catch elephant poachers and traders in Kenya and other ivory crime hotspots.