Police divers will patrol and search the River Clyde as part of the security operation ahead of the COP26 climate change conference in Glasgow. 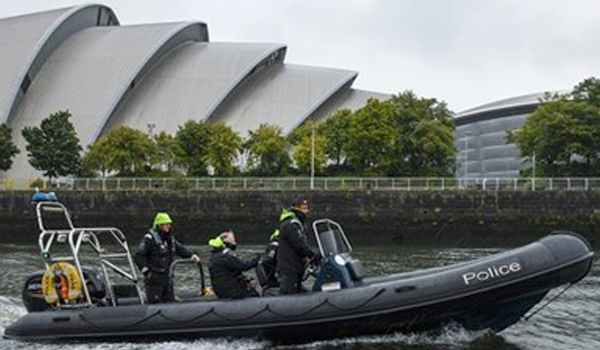 Police Scotland said the “highly skilled” specialist officers from its dive and marine unit, who can search in confined spaces as well as capture underwater footage, will be patrolling the river and its banks in the run-up to the summit in November.

During COP26 itself, Ministry of Defence (MoD) Police will monitor the four-mile stretch of waterway “providing a 24/7, armed policing presence” with assistance from Police Scotland divers when required.

“This is a historic event, with one of the biggest mobilisation of police assets the UK has ever seen, and that means some restrictions are needed to help keep participants, visitors and members of the public safe.

“Any protest activity in or around the waterways during COP26 will be met with a proportionate policing response, which balances the needs and rights of those wishing to take part, against the safety and wellbeing of protesters.”

He is also urging the public to “trust their instincts” and if they spot anything unusual in or around the waterways to report it to the police.

Police Scotland’s dive and marine unit is just one of the specialist resources that will be deployed during COP26 as part of the security operation.

The river will also be subject to movement and mooring restrictions for approximately three weeks to “ensure the safety of all involved, including world leaders and heads of state, delegates, and the wider public”, said Police Scotland.

Superintendent Sandy Stewart of MoD Police said: “Our marine unit officers will be supporting the Police Scotland operation for COP26, providing a 24/7, armed policing presence on the River Clyde and ensuring compliance with the legal restrictions put in place, to deliver a safe and secure event for all involved.”

Police Scotland said its dive and marine unit specialises in security searches, missing person searches and the recovery of evidence, with its high-speed patrol boats able to “respond quickly to incidents or threats on the waters in and around Scotland”.

All police divers complete an eight-week basic air dive course together with a number of other specialist courses, such as licensed search officer, swift water rescue technician and confined space search officer, which Police Scotland says is a “crucial capability” in the lead up to COP26.