Lincolnshire Police is the first, and it believes only, force to introduce baby boxes for all new parents to promote positivity about pregnancy and families. And by embracing the initiative that celebrates new life, the force says it demonstrates the importance the organisation places on supporting families as they welcome a new addition. 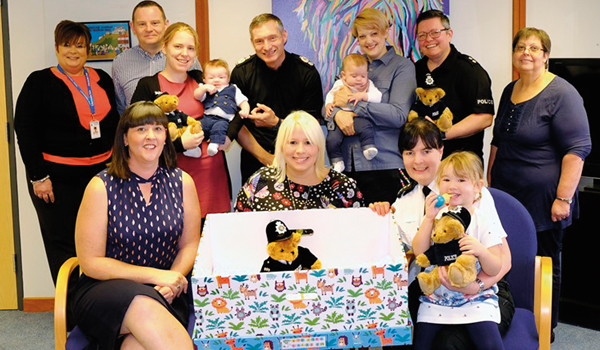 Lincolnshire Police is the first, and it believes only, force to introduce baby boxes for all new parents to promote positivity about pregnancy and families. And by embracing the initiative that celebrates new life, the force says it demonstrates the importance the organisation places on supporting families as they welcome a new addition. The box contains newborn essentials such as baby grows and muslins, as well some personalised Lincolnshire Police items, and can also be used as the babys first bed. The Lincolnshire Police baby box idea was born following feedback from a frontline officer who found that following the announcement of her pregnancy, the restricted duties she was placed on was inconsistent with some of her colleagues. A small working group established that by educating and training all supervisors and line managers the force could ensure its staff still feel valued in their role while pregnant. Lincolnshire Police is now confident that when a member of police staff, officer or volunteer announces their good news managers will be positive about pregnancy. Detective Chief Inspector Suzanne Davies explained: We needed to make sure that no new parent ever feels like their circumstances are an inconvenience to the organisation. We are a family force and so we see a new baby as an addition to that family. We know that this is a joyous occasion, but it can be isolating and terrifying and we havent always got it right in terms of supporting the wellbeing of new parents. We need to be united as a workforce in celebrating our staff becoming parents and this is a gesture that reinforces that thinking. The idea that every baby will receive an identical box, regardless of circumstance, has been in place in Finland since the 1930s and was recently introduced in Scotland. They have also been trialled at a number of London hospitals, while all new parents in the London borough of Hackney will soon be given baby boxes. The baby box programme has helped Finland achieve one of the worlds lowest infant mortality rates. Lincolnshire Police human resources adviser Kate Rogers said: With each box presented to a police officer a donation will be made to the St Georges Police Childrens Trust, which is a registered charity providing financial support to children and young people whose police officer parent has either lost their life or had an illness preventing them from being able to work. Conversely, with each box presented to a member of police staff, a donation will be made to the Rainforest Ward at Lincoln County Hospital, which provides excellent care for sick children in our county. PC Hayley Bracegirdle will be the first expectant mum to receive a box, describing the initiative as a lovely idea. Lincolnshire Police said reactions to the box from new and expectant parents have been very positive. PC Kirstie Taylor, currently on maternity leave, said it shows positivity about pregnancy and promotes families, adding: It is a really nice gesture from the force. T/Inspector Rachel Harrison felt the box demonstrated a shift in attitude in the force: Its a fantastic idea. Its really encouraging to see changes in the way the force deals with pregnancy. It feels like the pressures and stresses of having a family are recognised. For staff adopting, their child may have outgrown the box and so will receive an alternative age-appropriate gift.