Technology is being proposed to ensure those firing weapons, whether police or offenders, are authorised to do so and firearm theft is no longer a major problem. 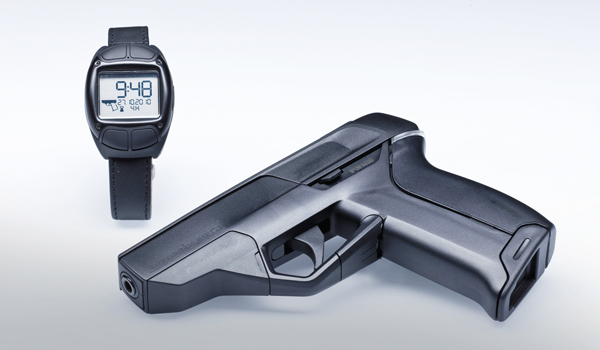 On August 6, 1977, the 24th edition of the science fiction comic 2000AD carried a story titled The Wreath Murders featuring futuristic lawman Judge Dredd. Towards the climax of the tale, a criminal gets hold of Dredds hi-tech Lawgiver firearm and tries to use it against him, only to discover it will not fire. It is programmed to accept my hand print only, Dredd explains. The same concept appeared more recently in the James Bond film, Skyfall, in which a Walther PKK handgun is fitted with biometrics to ensure it can be fired only by 007 himself. In the real world, there have been many incidents in which a weapon that could be fired only by an authorised user  a so-called smart gun  would have proved an extremely effective safety measure. In June in the German city of Munich, two police officers responded to a fight on a subway train. They confronted the main aggressor who then shoved one of the officers, grabbed his pistol and fired at the officers colleague, hitting her in the head. The man also wounded two members of the public before being arrested. In Plymouth last October, 45-year-old Matthew Hodge grabbed the Taser of PC Wayne Myers while the officer was attempting to arrest him in connection with an outstanding warrant. Hodge then tried to discharge the Taser at PC Myers before being overpowered by other officers who arrived at the scene. In March, a radicalised Muslim man was shot dead at Orly airport in Paris after attempting to seize the weapon of a soldier patrolling the facility. Despite the UK having some of the most restrictive gun laws in the world, weapons can, and regularly do, go missing or get stolen, and often end up in the wrong hands. The firearm used to murder MP Jo Cox had been stolen from the back of a car belonging to a pest controller. In Sheffield in May, a gang of armed robbers raided a farmhouse in West Handley and stole 18 shotguns, together with a large quantity of cash and jewellery. Last month, in response to a Freedom of Information request, the Ministry of Defence Police admitted that one of its officers had lost his loaded Heckler and Koch MP5 assault rifle, accidentally dropping the weapon from a boat during a patrol. Smart gun technology has been in development for more than a decade, but it is only in the past few years that the first commercially available weapons have reached the market. One of the leading products is the iP1, a handgun created by German firm Armatrix. The weapon is designed to be used in conjunction with a smart watch worn by the user. Both contain RFID (Radio-Frequency IDentification) chips that interact with each other within a range of 10in, turning on the firearm. A smart system gun will shoot only if it is within range of this watch. As soon as the gun loses radio contact with the watch, for example, if it is knocked out of the shooters hand, or in case of loss, theft, etc, it automatically deactivates itself, says Armatix. And Armatrix says the iP1  which costs three times as much as a conventional handgun  will not fail at critical times. RFID chips are well-established technology and the watch contains enough battery life for a years standby. Although the biggest market is for handguns, smart gun technology can also be applied to shotguns, of which there are at least 1.3 million in England and Wales according to the most recent Home Office figures. OF Mossberg & Son is the oldest family-owned gunmaker in the US. Known for its highly-regarded range of shotguns, the company is also leading the drive to incorporate smart technology into weapons. Chief executive officer Jonathan Mossberg is the brains behind the iGun, an updated version of the companys Model 500, a 12-gauge shotgun that has been in production since 1961. The magnetic tag-enabled iGun is activated by a ring worn by the user. The ring sends a signal to a computer chip embedded in the iGuns stock. When the ring comes in close range to the normal ring-finger placement on the firearms stock, the iGun compares a unique