Officers were subjected to “appalling violence and hostility” as they tried to shut down an unlicensed music event at an industrial warehouse in South Gloucestershire at the weekend. 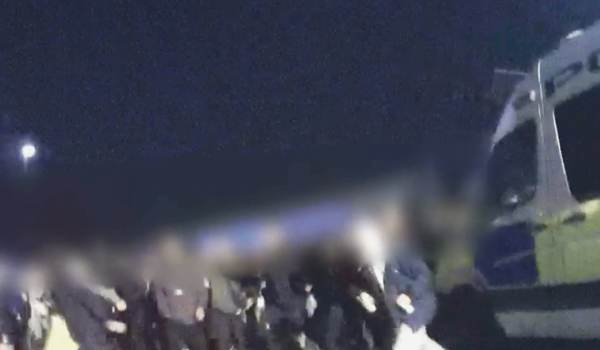 Up to 700 people were estimated to be at the event, which Avon and Somerset Constabulary Chief Constable Andy Marsh said was a “reckless and blatant breach of Covid-19 regulations”.

He praised the courage of the officers who responded to disperse the gathering, adding: “The appalling violence and hostility shown towards the police, the like of which I’ve rarely seen in my policing career, was wholly unacceptable and reprehensible.”

Mr Marsh said “shocking” video footage released by the force yesterday (November 4) “shows the courage of those officers who were simply going about their duties to keep people safe.” (https://www.avonandsomerset.police.uk/news/2020/11/unlicensed-music-event-organiser-handed-10k-fine-over-covid-19-breach/)

“As soon as we became aware of this event officers worked to prevent it growing and to disperse people as quickly as possible,” he said.

“I want to pay tribute to the officers who responded and I am sure that the body-worn video will help give the community confidence in our capability and intention to deal firmly with any such breaches.

“We’re thankful none of the officers were seriously hurt and that’s in no small part down to the skill of the team on the ground and those working across the force over the weekend.”

A man in his thirties has since been fined £10,000 for organising the event in Yate near Bristol. He was arrested while appearing to clear away music equipment.

The force said detectives had been “working around the clock” to secure sufficient evidence to impose the £10,000 fine against him, which he was issued with yesterday afternoon.

So far eight people, aged 17 to 33, have been arrested for a variety of offences, including violent disorder and assaulting an emergency worker.

Mr Marsh said: “This was a blatant breach of the current Covid-19 regulations and issuing the maximum possible fine under that legislation shows our robust approach to enforcing the law against those who selfishly fail to show any personal or collective responsibility when it comes to the scenes witnessed over the weekend.

“It is hard to adequately explain how reckless it was to organise an unlicensed music event during the midst of a pandemic that has claimed so many lives. We are facing a moment in this pandemic when scientists and medics and warning of the grave risks and consequences of not controlling the virus. Millions of people across the country are making sacrifices every day to protect the NHS, while key workers are doing shifts around the clock to help their communities.

“Yet those involved in this event acted criminally and disgracefully, with no thought for anyone other than themselves. It was deliberately organised in secret with complete disregard to the current situation the country is facing at the moment.”

Avon and Somerset Constabulary was first made aware of the event at 10.35pm on Saturday, October 31, by a member of the public. The first officers arrived on the scene within 12 minutes, by which time hundreds of people had already gathered.

Roads were closed and efforts were made to block off the premise’s various entrance points throughout the night to prevent more people gaining access to the site. A secure cordon was in place by 4am at which point it was estimated 500-700 people were inside.

The constabulary said officers worked throughout the day to shut down the event, seizing sound equipment and clearing the area.

“That happened once they had secured the site, acquired additional support from within Avon and Somerset and neighbouring forces, and devised a plan to protect the public’s safety,” it added.

“Inquiries to identify any other offences from the event or individuals involved are continuing.”

Avon and Somerset police and crime commissioner Sue Mountstevens and leader of South Gloucestershire Council Councillor Toby Savage said they “cannot condemn enough the irresponsible and reckless behaviour of those people who chose to attend an illegal rave in Yate at the weekend”.

In a joint statement they said: “Everyone would have been aware of the dire situation we currently face because of the very public conversations and media coverage about the national transmission rate of Covid-19 being on the rise and the increase in the number of positive cases. This was a demonstration of flagrant disregard for other people’s lives and for that there is absolutely no excuse.

“The stupidity and recklessness shown by people at the event is beyond contempt. In addition people who shouldn’t have been at this event behaved despicably towards police officers and other emergency service staff who arrived to put a stop to the illegal gathering.

“Our emergency service workers are women and men with families who are out on the front line putting themselves at risk to protect others and they should never have to face abuse and assaults for doing their jobs and trying to protect people.

Mr Marsh said an investigation team had been set up in response to what happened at the weekend.

“Given the large-scale nature of the operation to deal with the event, there is a lot of information we have obtained that that team needs to go through,” he said. “This includes taking more statements and continuing to review footage captured by officers’ body worn cameras.

“This work will continue apace as we seek to bring those responsible to justice.”

Mr Marsh is also urging anyone with video footage or information about the incident to get in contact with the force.

“What may seem like a small detail may have a significant impact on our investigation,” he said.