Sex offences on train `more than double in five years`

The number of sexual offences on trains and tubes reported to forces in England, Scotland and Wales have more than doubled in five years, new data reveals. 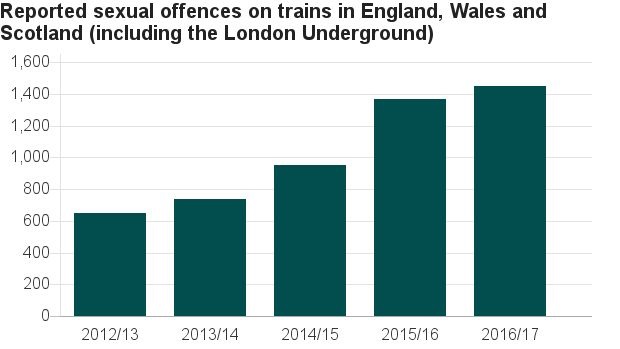 The number of sexual offences on trains and tubes reported to forces in England, Scotland and Wales have more than doubled in five years, new data reveals. British Transport Police (BTP) figures  obtained in a Freedom of Information request  show 1,448 offences were reported in 2016-17, up from 650 in 2012-2013. The majority of reports were in relation to sex assaults on females aged 13 and above. UK charity End Violence Against Women Coalition (EVAWC) praised the effort that BTP, City of London Police, the Metropolitan Police Service, train companies and Transport for London have put into campaigns to encourage victims to report abuse. EVAWC co-director Rachel Krys stressed that the rise in reported offences does not suggest women are more at risk than a few years ago. BTP Detective Chief Inspector Darren Malpas said the `Report it to stop it` awareness campaign  launched two years ago by the force  is likely to have prompted an increase in reporting. He said: We fully expected to record a rise in sexual offences and it is pleasing that previously reluctant victims of sexual offences now have the confidence to report this to us. “Tackling all forms of unwanted sexual behaviour on public transport is a priority for British Transport Police and we have worked hard in recent years to send a clear message to victims that they will be taken seriously and we will investigate offences.” The campaign encourages people to report “anything of a sexual nature, including rubbing, groping, masturbation, leering, sexual comments, indecent acts, or someone taking photos of you without your consent”. We take every report of unwanted sexual behaviour seriously and our specially trained officers work hard to find those responsible, by speaking with witnesses and reviewing the extensive CCTV available to us on the rail network, said Det Chief Insp Darren Malpas. In 2013, BTP introduced a text message service to provide passengers with a simple and discreet way to report offences to the force. Ms Krys added: “It is really important that these campaigns continue. When the scale of sexual violence is better understood, police forces take it more seriously and measures can be taken to reduce the risks to women and tackle perpetrators, who for too long had been acting with impunity.” “Research on the London Underground last year showed that the majority of these offences happen during rush hour, dispelling the myth that this is anything to do with a late-night drinking culture. “These figures showed that it is sober men, travelling to and from work who thought they were entitled to assault women passengers, and that they would get away with it.”