The National Crime Agency (NCA) says it has “significantly disrupted” a people smuggling network after the arrest of seven people suspected of bringing hundreds of Albanian migrants to the UK illegally. 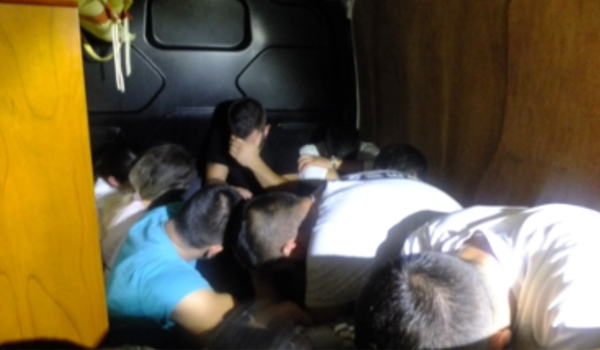 A group of smuggled migrants crouched down in the back of a van.

The alleged ringleader of the organised crime group (OCG) was among those arrested in a series of raids across South London, Surrey, Oxfordshire and Hartlepool yesterday (July 20)

The NCA says the group – suspected of having contacts in France, Germany the Netherlands and Poland – is believed to have used lorries and hired vans to transport people from northern France.

The seven arrested are being questioned on suspicion of a range of offences, including conspiring to facilitate illegal entry to the UK and money laundering.

The operation, which involved around 100 officers, was supported by the Metropolitan Police Service and Immigration Enforcement. The NCA said approximately £30,000 cash was also recovered.

NCA Branch Commander Richard Harrison said: “We believe these arrests will have significantly disrupted an organised criminal network responsible for smuggling potentially hundreds of people into the UK illegally.

“The network claimed to provide a top of the range service and charged accordingly, using complicit drivers to transport migrants in hired vehicles.

“This activity represented a significant threat to both the safety of the migrants involved and the security of UK border controls.”

The NCA said over a period of six months between July and December 2020, six smuggling attempts were stopped by Border Force officers carrying out searches of vehicles at the Channel Tunnel terminal in Coquelles, near Calais.

All have subsequently been linked to the OCG under investigation by the NCA.

In one of those attempts, in August last year, two vans were intercepted within half an hour of each other, each carrying ten Albanian migrants.

The drivers of all the stopped vehicles were arrested and investigated by Immigration Enforcement.

In May 2021, two further attempts linked to the network were stopped, as NCA investigators shared intelligence with French and German counterparts, which led to vehicles containing migrants being halted by police before they could reach the coast.

In some cases, migrants are believed to have paid the OCG between £20,000 and £25,000 to reach the UK. NCA financial investigators have identified numerous bank accounts alleged to belong to the network, each showing tens or even hundreds of thousands of pounds in turnover.

NCA Deputy Director Andrea Wilson said: “This operation shows that people smugglers are right at the top of the NCA’s target list.

“It is a form of criminality that sees people exploited for profit by criminals who have no regard for human life.

“Those involved in organised immigration crime should know that our officers are working day and night with partners in the UK and abroad to find them, disrupt and dismantle their business models and bring them to justice.”