The methodical search of a landfill site for a missing airman tested the resolve of all those involved, but should also provide immense learning in missing persons inquiries and staff welfare. 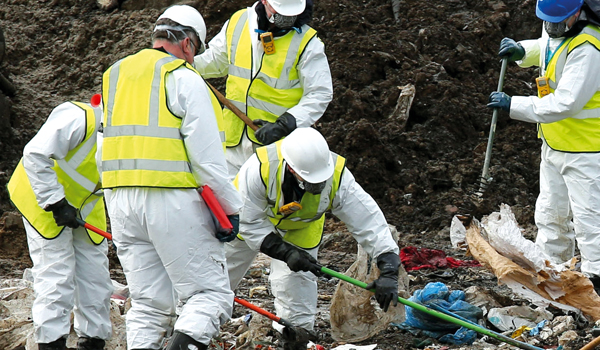 Arguably the biggest missing adult search in policing history has provided significant lessons in officer welfare. Some 249,349 missing person reports across 42 forces were recorded in 2015/16, with seven in ten medium cases taking no more than a day-and-a-half to resolve. However, the investigation into the disappearance of RAF serviceman Corrie Mckeague  reported missing on September 26, 2016 and graded as high priority within 12 hours  has proved unique for all police forces in England and Wales, according to Suffolk Constabulary. The search for the 23-year-old, who was based at RAF Honington, has ended up testing officers to the limit of their physical and psychological ability, with his family praising the unwavering lengths of force support that went beyond reasonable levels. Following a night out in Bury St Edmunds, Mr Mckeague is believed to have climbed into a waste bin before being taken away by a refuse lorry. Two months after the search of a landfill site in Milton, in Cambridgeshire, for the RAF gunner was concluded, Suffolk Constabulary can report positive feedback from a 28-week operation that exposed the team of mainly volunteers to extreme hardship. The resulting reaction  endorsed by Suffolk Police Federation (SPF)  is that officers received extensive support with daily welfare checks and close monitoring of everyone involved in the search. This included scouring 8,800 tonnes of waste for Mr Mckeagues remains in an investigation that has cost £2.1 million to date. The initial search at Milton lasted 20 weeks and was halted for a peer review by East Midlands Special Operations Unit, which concluded the force had conducted a thorough, methodical and detailed investigation and explored all reasonable lines of inquiry with no new further leads needing to be pursued. It was restarted last October for a further eight weeks and then resourced by officers working on rest days. Senior supervising officer Detective Superintendent Katie Elliott said the officers carrying out the search worked extremely hard in difficult circumstances  with the nature of the waste being searched through, safety considerations, the extremes in weather and the depth of the search required presenting a number of daily challenges. She told Police Professional: The vast majority of those who conducted the search volunteered to do so and all those involved in the searches at Milton were provided with extensive welfare support. This included appropriate personal protective equipment, refreshments on site, the availability of pods to change in, as well as toilets and canteen facilities. Accommodation close to the site was also provided as well as evening meals. Daily welfare checks were conducted on all the search team and all staff were closely monitored. For example, if someone felt unable to complete a days work due to extreme tiredness they were able to stop, said Det Supt Elliott. On site, first aid was also provided and prompt access to physio treatment made available. Senior officers made frequent visits to the location to check on the welfare of search team members who were allowed to access emails on work mobiles and laptops if necessary. The feedback from those members of staff who took part was positive, added Det Supt Elliott. Darren Harris, chair of the SPF, said that while the search team had been subjected to extremes of heat and temperature which was very unpleasant, he was not aware of any issues involving officers, adding: Welfare was good. The investigation is unique on a number of fronts. The search for Mr McKeague, categorised as high risk almost straight away, has already lasted 17 months. The current £2.1 million bill includes £1,325,000 on the investigation itself  which Suffolk police and crime commissioner Tim Passmore has asked the Government to cover  plus £826,000 in officers salaries. Officers have spent 34,000 hours on the investigation  not including police staff time or overtime. Up to November 2017, 5,6