His Majesty The King has paid an historic visit to the Metropolitan Police Service’s (MPS) Command and Control Centre in Lambeth to thank a host of emergency workers for their efforts and support. 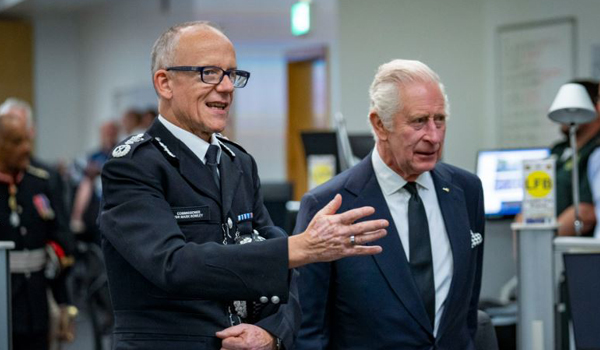 The new MPS Commissioner Mark Rowley, Deputy Commissioner Lynne Owens and the Lord Lieutenant of London Sir Ken Olisa greeted the party on their arrival on Saturday (September 170, where they were also joined by Home Secretary Suella Braverman and Mayor of London Sadiq Khan.

During His Majesty’s tour of the site they were able to meet and talk with a wide range of Met officers, staff and partners involved in different aspects of the policing and security operation, which as the largest in Met history is of an unprecedented size and scale.

He met those leading the operation, ‘Gold’ Deputy Assistant Commissioner Jane Connors, and ‘Silver’ Commander Karen Findlay, at the Special Operations Room, which provides comprehensive command and control facilities for pre-planned policing operations and extended major incidents. The largest of its kind in UK policing, it manages around 2,000 events a year, from elite sports occasions to demonstrations and ceremonial events such as Trooping The Colour.

His Majesty was also able to meet and talk with many other officers and key personnel, ranging from PCs deployed in the sector covering Buckingham Palace and specialist teams such as Royalty Protection, Special Escort Group and Firearms, to ambulance, fire, British Transport Police, and military personnel.

Officers from other forces were also present to represent those on ‘mutual aid’ that have travelled to assist from locations as diverse as Gibraltar and Northern Ireland.

His Royal Highness The Prince of Wales joined his Majesty at the close of the visit, after spending time meeting officers, including Welsh officers who are part of operation, and Met volunteers.

Sir Mark said: “It was a privilege to introduce His Majesty King Charles to some of the teams working hard behind the scenes to deliver this monumental policing operation, which will culminate in us deploying the greatest number of officers in the Met’s history for a pre-planned event on Monday. It gave officers and staff a real boost.

“Our priority continues to be ensuring people are able to safely pay their respects to Her Majesty the Queen, while still delivering core local policing and emergency response across the capital. This huge operation has required the support of almost every team within the Met and large numbers of officers joining us from across the country, as well as close working with our partners. Every individual involved has demonstrated great diligence and the utmost professionalism.”

A specialist team from the MPS’s Public Order Planning Unit has been responsible for ensuring the appropriate resources are in place and all aspects are coordinated across the entirety of the Met, from traffic and crowd management, to protected VIP movements and operational briefings. The team has a vast amount of experience, with responsibility for planning more than 15 major ceremonial, diplomatic and state events every year, including the Remembrance Sunday Memorial Service and the State Opening of Parliament.

All departments of the MPS have mobilised in order to meet the logistical and resourcing challenges of such a major operation, from Fleet and Estates to Uniform and Catering, as illustrated by some of the statistics below.

The policing operation in figures: