A terrorist who very unusually managed to infiltrate the British military and supplied bombs to dissident Irish republicans with plans that included killing police officers has been jailed for 18 years. 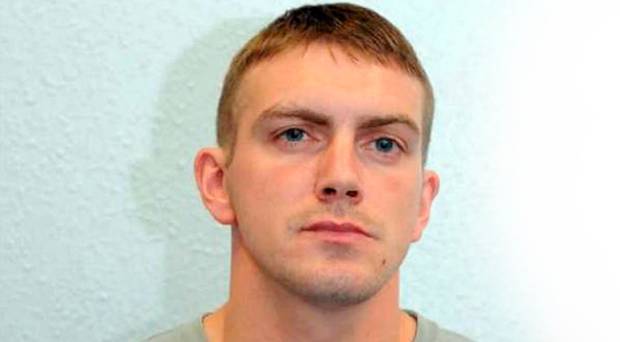 A terrorist who very unusually managed to infiltrate the British military and supplied bombs to dissident Irish republicans with plans that including killing police officers has been jailed for 18 years. Ex-Royal Marine Ciaran Maxwell compiled a library of terrorism documents, stashed anti-personnel mines, mortars, ammunition and 14 pipe bombs  four of which were later used  in 43 purpose-built hides at 14 locations in Northern Ireland and England. Bomb-making materials were found in barrels and buckets buried in the ground as well as an adapted Police Service of Northern Ireland (PSNI) pass card, a PSNI uniform and a police stab-proof vest. The 31-year-old, who is originally from Larne in County Antrim and was with 40 Commando based at Norton Manor Camp in Taunton, Somerset, at the time of the offences, pleaded guilty to preparation of terrorist acts between January 2011 and August last year, possessing images of bank cards for fraud and possessing cannabis with intent to supply. PSNI Detective Chief Inspector Gillian Kearney said Maxwell used his military know-how to accumulate and construct his devices, and described the infiltration of the military by a republican terrorist as “very unusual” and “certainly the first case of its kind in recent years”. Sentencing Maxwell on Monday (July 31) to 18 years in prison, which includes an additional five years on licence after he is released, Old Bailey judge Mr Justice Sweeney said the former lance corporal had betrayed his position in the armed forces. The judge added: “I`m sure that you were and will remain motivated by dissident republican sympathies and a hostility to the UK.” Mr Justice Sweeney rejected Maxwell`s account that he was motivated by post traumatic stress disorder resulting from a sectarian beating he received as a teenager. The court heard earlier that `potential` terror targets included the National Crime Agency`s headquarters in London and Larne police station in the province. In addition, he had street maps of military barracks, a council building, plans of intended targets plus details of the addresses of HMRC offices in Northern Ireland and the Northern Ireland Office in Westminster. He claimed after he was arrested on August 24 last year  when two dissident republican arms dumps were found near Larne  that he had “got in over his head” and had no intention of committing an act of terrorism or killing anyone. But at the beginning of a three-day sentencing hearing at the same court, prosecutor Richard Whittam QC said: “Mr Maxwell repeatedly accepted that the devices would be used by others for terrorist purposes. “For example, he agreed with the statement that the items were made for the Continuity IRA (CIRA) with the intention of attacking police and police stations.” Maxwells preparation for terror included 14 pipe bombs, two anti-personnel directional mines, two explosively formed projectiles (EFPs)  one with explosive fill, one without  29 complete firing systems and 33 initiators including two military initiators, 13 military Igniter Safety Fuse Electric initiators, three fully constructed improvised detonators and other components parts for improvised explosive devices (IEDs) plus a handgun stored in a hide in Northern Ireland. He had acquired sufficient quantities of materials across the province and England to make a further 19 pipe bombs, two anti-personnel directional mines, one EFP, three victim operated torch IEDs, 34 firing systems and 76 initiators. Officers uncovered 397 rounds of ammunition subject to licensing restrictions, 137 blank rounds of ammunition, four British Army magazines, 29.27 metres of detonating cord, 5.263 metres of green burning fuse and ten timed power units, as well as large quantities of chemicals for use in manufacturing explosives and IEDs both in England and Northern Ireland. In England, a significant cannabis production at one site was discovered from which he intended to produce the drug for selling. Assistant Chief Constable Stephen Mart