Responding to the call

As forces prepare for critical assessments of how they investigate modern slavery, officers and staff are rapidly building the services capability in this area following a call to arms by the Prime Minister. Police Professional visited the Modern Slavery Police Transformation Unit to find out more. 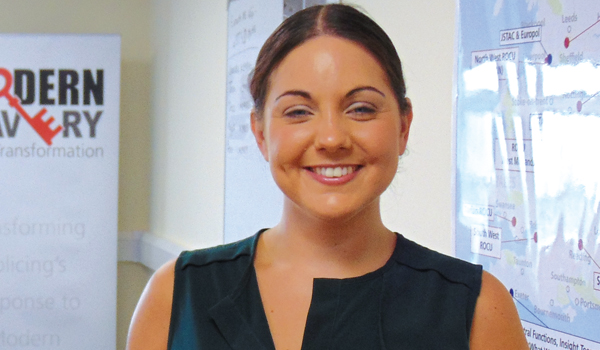 Just over a year ago, Devon and Cornwall Police officers on patrol in Exmouth encountered a man begging for money in the town centre. As they spoke to him, they noticed another man nearby who immediately ran off. After further inquiries it became evident that the man had been forced into begging and had been brought to the UK under duress. Rather than being arrested, he was offered support and eventually placed in a safe house. It was the first time the small seaside town had experienced the spectre of modern slavery  and makes it all the more fitting that Exmouth is now home to a new unit that aims to transform the way police across the country deal with the problem. While she was Home Secretary, Theresa May made it clear that tackling modern slavery was a top priority, issuing a call to arms for law enforcement and partner agencies to improve their response. Around the same time, barrister Caroline Haughey was asked to carry out a review of the policing response to the New Modern Slavery Act 2015 amid concerns that forces were failing to use the new powers and that nothing much had changed since the new legislation. The Prime Minister then put together a task force that included the National Crime Agencys (NCA) Director General Lynne Owens and Devon and Cornwall Police Chief Constable Shaun Sawyer, the National Police Chiefs Council (NPCC) lead on modern slavery and organised immigration crime. A bid for transformation funding was then suggested. The initial expectation was that the bid would fail as it broke all the rules in terms of size and scale and complexity, but it is a measure of the level of importance attached to the problem that the bid was successful with an award of £8.5 million, funding the project through until April 2019. The award was made last October and programme director Clare Gollop, who had previously worked alongside Mr Sawyer on the modern slavery portfolio, then had just a few months to get everything in place to launch the Modern Slavery Police Transformation Unit in April 2017. Three months on, the organisational chart of the unit is evidence both of the vast amount of work that has been carried out and its huge scale and reach. Her Majestys Inspectorate of Constabularys (HMIC) Thematic Inspection of Modern Slavery is due to be published very soon and, as soon as it lands, the unit will create a new action plan, focusing attention on forces in need of the greatest amount of assistance to help create more consistency across the country. Headed by Mr Sawyer, with Superintendent Jez Cafey as commander, the unit has at least nine separate strands that work in tandem to support forces in achieving the Prime Ministers goal of completely eradicating modern slavery by 2030. Detective Chief Inspector Jenny Bristow is head of operations and development. She first gained experience in this area of investigation while working at Cambridgeshire Constabulary. A labour exploitation case she had been asked to look into turned into the first modern slavery ring the force had dealt with and quickly expanded into a huge investigation involving five separate organised crime groups. She led a second phase of the operation and then went on to become force lead for the NCA-led investigation, during which she gained even more valuable experience, particularly working across international borders. Such was the breadth and depth of her experience that Det Chief Insp Bristow was interviewed by Ms Haughey for her review of the Modern Slavery Act. After a spell with HMIC, where she helped to design the modern slavery inspection, the opportunity to work for the new unit came up. Cambridgeshire is a very small force but we were punching well above our weight when it came to modern slavery. There were a lot of challenges and a lot of lessons learned the hard way. I want to take all of that and use it to help wider policing colleagues so they dont have to go through the same challenges we did in the early days, said Det Chief Insp Bristow. The funding has cr