Just 13 arrests were made across the entire policing operation in Scotland during events to commemorate the death of The Queen. 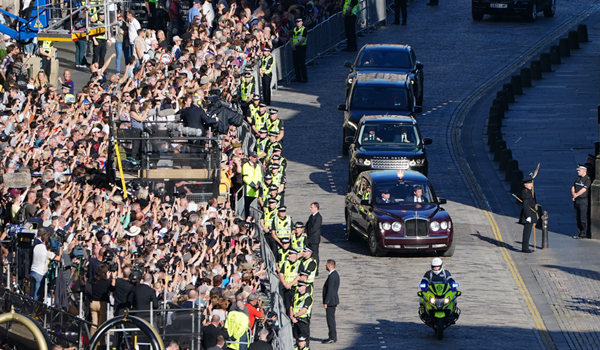 The hearse carrying the coffin of Queen Elizabeth II makes its way up the Royal Mile on the journey to Edinburgh Airport, where it was flown by the Royal Air Force to RAF Northolt, before travelling onward to Buckingham Palace. Picture: PA Wire/PA Images

Police Scotland Chief Constable Sir Iain Livingstone said these were for offences such as low level disorder, violence, abusive and threatening behaviour and the illegal use of drones. One of those arrests has already resulted in a conviction at court for breach of the peace, he said.

Sir Iain was reflecting on the policing response during Scotland’s Operation Unicorn at a Scottish Police Authority (SPA) meeting on Thursday (September 29).

He thanked and paid tribute to officers and staff, and their families, for “successfully delivering a safe and secure operation following the death of Her Majesty The Queen”.

Sir Iain said: “As is so often the case in times of sadness or national challenge, duty requires policing to step forward with compassion and professionalism, individuals within the police service of Scotland setting aside personal plans at short notice to give public service.

“Police Scotland had an important role to play to ensure significant events relating to Her Majesty’s death could be held safely, securely and with dignity.

“Operation Unicorn has been planned by many agencies over many years.

“In the hours and days after Her Majesty’s death, officers and staff from every local policing division and every national department and capability were deployed to support Operation Unicorn.

“As chief constable, I had a clear and express expectation that officers and staff would respond to this important and solemn occasion with professionalism and high standards and they did.

“Everyone in Police Scotland played their part – those who planned our response over many years; those directly deployed to Operation Unicorn; others who provided effective policing right across the country during this intense period.”

Sir Iain added: “It is important to stress the fundamental outcomes of this enormous operation of safety and security.

“There were no security breaches; no significant violence or disorder; no safety issues; and relatively few arrests among countless interactions and engagements between officers and our fellow citizens over the course of the Operation Unicorn period.

“Across the entire operation, across the whole of Scotland, we recorded just 13 arrests.”

He said Operation Unicorn was “activated quickly” and on Sunday September 11, 4,000 officers were deployed to Operation Unicorn, as more than 100,000 people gathered along the 175-mile route of the cortege from Balmoral to the Palace of Holyroodhouse in Edinburgh.

On the Monday, more than 2,500 officers were deployed as His Majesty The King arrived in Edinburgh and alongside members of The Royal Family undertook the procession from Holyroodhouse to St Giles’ Cathedral with tens of thousands of people lining the street.

Around 35,000 mourners thereafter queued over 24 hours to pay their respects as The Queen lay at rest at St Giles’, said Sir Iain.

“On Tuesday September 13, 3,000 officers were deployed on Operation Unicorn as members of the public continued to pay their respects, before the coffin carrying Her Majesty The Queen was taken to Edinburgh Airport, where she left Scotland for the final time,” he added.

Sir Iain said on a “very small number of occasions” during Operation Unicorn, operational officers on the ground made “at the time dynamic assessments that the behaviour of individuals required police intervention as it appeared to breach the threshold of criminality”.

“Of course, where concerns are raised about policing, we will assess them, seek contact with any relevant individuals and respond,” he added.

“I categorically undertake, as I have done consistently while holding the office of chief constable, that if we have got something wrong in relation to a specific set of circumstances or we could have done something better, we will acknowledge that and take necessary and proportionate action to put it right.”

Sir Iain said policing is often placed in “an invidious position” by those calling for a certain response depending on which group is making their voice heard.

“Campaigning and demonstration is a legitimate, necessary, vital part of civic life, irrespective of the position being advanced. However, let us be equally clear – abusive or threatening behaviour is not legitimate protest,” he said.

“Our experience across the Operation Unicorn period was that communities supported their police service during a large number of events and public gatherings across the country.”

Sir Iain said that as with any operation of this size, scale and scope, Police Scotland will undertake “a full and thorough de-brief in relation to Operation Unicorn to capture the good practice which was evident and to learn any lessons, from the magnitude of resources deployed through to specific cases and instances”.

He concluded: “The rapid activation and delivery of an enormous and complex operation was greatly enabled by our structure as a single police service and, along with our response to Covid-19 and COP26, continues to underline the significant benefits that the police service of Scotland brings. Our ability to quickly deploy with a shared mission, values and capability.

“Reform of policing in Scotland now delivers better, more effective service and capability at greater value to the public. Operation Unicorn; the policing of pandemic; and the safety and security operation around COP26 could not – would not – have been delivered as successfully under legacy arrangements.

“That progress, demonstrated by operational delivery, should be a source of confidence in policing in Scotland.”