Last weeks Excellence in Policing conference tested the temperature of the service and examined how forces can tell if they and their workforces face a healthy future. 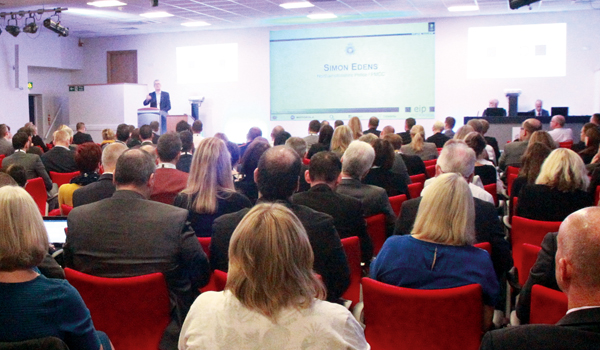 Over the past year, policing has had to bear the brunt of challenges not faced anywhere else in society. Officers have responded in the aftermath of five terror attacks, they have been asked to keep pace with the ever-evolving threat of cybercrime, all while dealing with cuts that have affected the capacity, capability and condition of the entire service. In this challenging operating environment, it can be useful to step back and assess which parts of policing are working well and which are particularly feeling the strain. These vital signs can be difficult to notice, but once identified, can provide an invaluable insight into the ways policing needs to adapt. At the 17th Excellence in Policing conference, held at the College of Policing in Ryton-on-Dunsmore last week, senior figures from across policing discussed the signs that show whether forces are healthy and able to meet current demands, and how they should respond to prepare for the challenges of the future. Responding to demand It is impossible to deny that the level of demand on policing has spiked. Police-recorded crime figures rose ten per cent across England and Wales last year, and violent crime has surged by 18 per cent. In just one day this summer, one force recorded more calls for service than it did on New Years Eve  traditionally the busiest day of the year. The way that forces respond to this pressure can be highly indicative of how well they are performing. Her Majestys Inspectorate of Constabulary and Fire and Rescue Services (HMICFRS) has found that some are downgrading calls to cope with the high volume of incoming requests for service, meaning that some cases that require an urgent response experience long delays before an officer attends. Other shortcuts have emerged in basic investigations, as excessive workloads have left some officers failing to make arrests because doing so could tie them up for an entire shift. HM Inspector of Constabulary Zoë Billingham described both these circumstances as warning signs that a force may be struggling to meet expected standards of effectiveness. By contrast, better-performing forces have been able to demonstrate that they have moved away from the volume-focused approaches of the past that incentivised negative outcomes such as unnecessary criminalisation. According to Chief Constable Simon Edens, chair of the national Performance Management Coordination Committee (PMCC), forces are now beginning to place harm reduction at the core of their decision-making, and increasing the focus on this through performance management will lead to even better outcomes for communities. The implications of rising demand may also not be entirely negative. Despite the obvious impact on resources and officer wellbeing, Mr Edens said a growing number of calls for service might indicate greater public confidence in policing. High demand also provides more information about the issues that are affecting communities, and by extension, how well equipped forces and partners are to respond. I think demand is good, he said. It gives us an opportunity to protect people from harm, and confirms that people have trust and confidence in us. But we have to get better at responding to it with the resources that we have. The PMCC will soon start developing a new approach to help forces deal with demand. In the meantime, however, forces could reap significant benefits by improving their understanding of demand at a local level. For example, Northamptonshire Police was recently tempted to launch a new operational delivery model as soon as possible, but after pausing to conduct a detailed analysis of local demand, it has been able to refine to model into something Mr Edens is convinced will last far longer and work more effectively than the earlier version. The need to better understand the effects of demand extends to the national level. The National Police Chiefs Council (NPCC) has been conducting extensive research into why demand has changed so much since 2015, but its work has been hampe