Two officers have been praised after using their car to prevent a lorry wheel hitting traffic on a busy motorway. 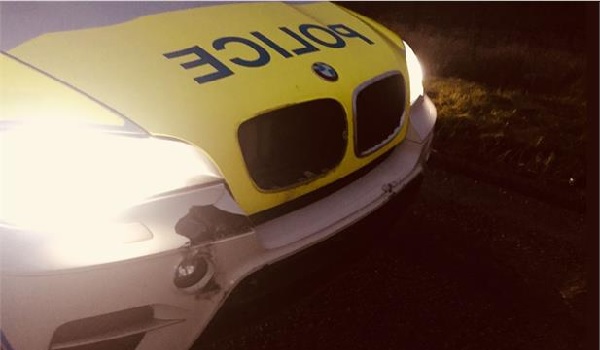 Two officers have been praised after using their car to prevent a lorry wheel hitting traffic on a busy motorway. At around 4.20pm on Monday (November 13), two Cumbria Constabulary officers from the Mobile Support Group were travelling on the M6 southbound near Shap when a HGV shed two wheels. One wheel stopped on the verge while another continued travelling along the hard shoulder at around 60mph. As it was heading towards the first lane of the motorway, an officer drove in front of the wheel, and allowed it to strike the rear of the car in an attempt to deflect it into the verge. The initial contact slowed the wheel and kept it in the hard shoulder, but when it touched the kerb, the tyre bounced back into the road. Reacting instinctively, the officer deliberately hit the wheel out of lane one using the front of the car to prevent it from colliding with traffic. This was done twice before the wheel stopped moving. Chief Inspector Andy Wilkinson said: I have no doubt that the quick-thinking of the officers travelling in the patrol vehicle has potentially saved other road users from serious injury  if not worse. Whilst their actions involved putting themselves at risk, they were able to use their high-level of advanced driving skills to bring to an end a hazardous situation therein committing to the safety of members of the public using the motorway. Had the tyre bounced up and gone through the windscreen of a car travelling at speed along the M6, the incident could easily have ended in tragedy. Both officers are a credit to both the Mobile Support Group and Cumbria Constabulary as a whole. The driver of the HGV was served with a Traffic Offence Report due to the condition of his vehicle.