Two stewards were hospitalised following disorder at Brightons match against Crystal Palace, described as a return to the dark days of football by Sussex Police. 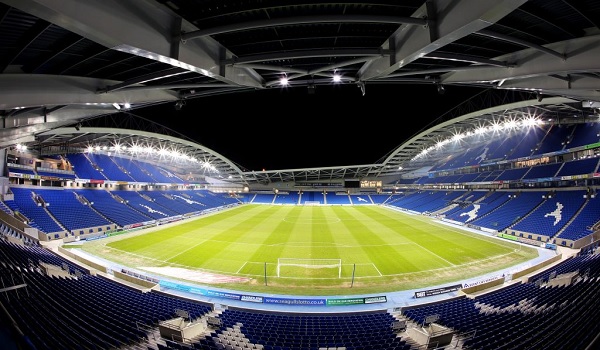 Two stewards were hospitalised following disorder at Brightons match against Crystal Palace, described as a return to the dark days of football by Sussex Police. Chief Inspector Simon Nelson, match commander for the fixture, said groups of masked hooligans attempted to gain entry to the Amex stadium on Tuesday (November 28) wielding pyrotechnics, knives and knuckledusters. A large number of people, believed not to have had tickets, overran the turnstiles in the south stand to gain access to the away supporters section, where several flares were set off throughout the match. Six people were arrested, and two stewards were taken to hospital  one of whom suffered three fractured ribs. Both were discharged later that night. Disturbances also broke out at Brighton railway station as fans became frustrated that they were going to miss the start of the match due to train delays. Six minutes into the match  which ended as a goalless draw  the stadiums turnstiles were closed, leaving some fans with legitimate tickets locked outside the ground. Chief Insp Nelson said it was the most challenging football-related disorder he has ever experienced. I have been involved in football policing at all levels and have been a match commander for Albion matches for 12 years, but I have never come across such concerted attempts to cause disorder and engage in violent behaviour. “We will be reviewing our operation and discussing the events of the afternoon and evening with the clubs. This was a return to the dark days of football and is not acceptable, he added. “We will also be carefully studying CCTV from in and around the stadium and the city in conjunction with Brighton and Hove Albion and colleagues from the Metropolitan Police to identify those responsible for the disorder.” Kamar Jamal, 30, and Mark Kentfield, 41, were both charged with using threatening, abusive or insulting words or behaviour to cause harassment, alarm of distress. Michael Shaw, 45, was charged with being a football spectator failing to comply with a banning order. All three men have been bailed to appear at Brighton Magistrates Court on December 14. A 26-year-old man and a 15-year-old boy were also arrested under suspicion of throwing or discharging a missile. They have been released under investigation. And a 51-year-old man who was arrested on suspicion of using threatening, abusive or insulting words or behaviour to cause harassment, alarm or distress, was released from custody the next afternoon. Brighton Hove and Albion chief executive, Paul Barber, said: First, we hope the two stewards hospitalised in the disorder have not suffered serious injuries. The disorder was caused by a minority of individuals who attempted to gain entry to the stadium without tickets. Thanks to the swift action of the clubs stewarding team, supported by Sussex Police, we avoided further, major disorder  and while some genuine fans were left extremely disappointed and unable to get into the stadium, the correct decisions were made. Id like to thank the majority of fans of both clubs for their good behaviour and patience in complying with the instructions of our stewards and police.