Eight out of ten drivers are ignoring 20mph speed limits, according to new data. 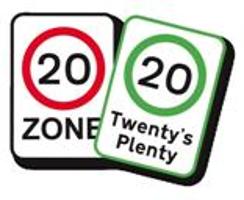 Eight out of ten drivers are ignoring 20mph speed limits, according to new data. Figures released by the?Department for Transport?show that 81 per cent of drivers broke the limit at nine sites across the country with one in six topping 30mph and one per cent travelling at over 40mph  twice the authorised speed. The report also shows one in ten motorists exceeds motorway speed limits by at least 10mph, and one per cent hit 90mph. The figures, from 2016, were measured using traffic counters installed on the road. They contrast sharply with a poll commissioned by road safety charity Brake which said only 52 per cent of drivers admit to going over 20mph limits. Speaking in May when their findings were published, Brakes community engagement manager Dave Nichols said: All children have the right to play safely and live a healthy life without fear. Yet in the UK, one of the most developed countries in the world, our children are often denied these rights because of the lethal danger posed by fast traffic. He called on drivers to take more care in communities and make roads safe for children.