Burglaries have been cut by more than 3,000 and 60,000 officer hours saved since the introduction of a property marking initiative in London. 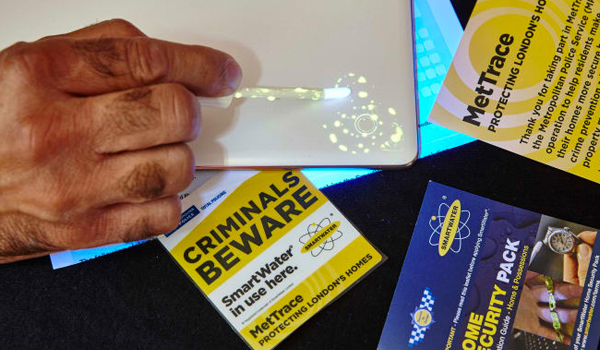 Burglaries have been cut by more than 3,000 and 60,000 officer hours saved since the introduction of a property marking initiative in London.

The Metropolitan Police Service (MPS) launched its MetTrace programme two years ago and since then more than a quarter of a million homes in the capital have been provided with the water-based, traceable marking liquid.

The MPS says offences in MetTrace areas are down 27 per cent, compared to a five per cent reduction in non MetTrace areas. Additionally, it says this has resulted in savings to the force of more than £2 million.

The programme is designed to reduce residential burglary in London and residents are given the SmartWater® forensic marking system free of charge to help protect property such as smartphones, computers, bicycles and jewellery.

The programme has seen a reduction of more than 3,000 burglaries since its introduction two years ago, the force said.

It added that over 60,000 officer hours have been saved through the reduction in investigation time, allowing them to be deployed to other frontline duties.

Detective Chief Superintendent Iain Raphael, the MetTrace project lead, said: Were delighted with these results, not only because we have been able to reduce the number of burglary victims so significantly, but also the cost savings in terms of police time is good news for all Londoners.

MetTrace also provide officers with an excellent opportunity to engage with local residents and discuss any crime prevention or other police-related issues. A recent MPS survey showed confidence in the police at 93 per cent in MetTrace areas compared to 69 per cent in non MetTrace areas.

Officers have also been trained to detect the presence of SmartWater  which has a unique forensic code  on stolen property.

Over the next 12 months a further 174,908 MetTrace kits will be rolled out across London.