Policing in the US has rebuffed Donald Trumps call to rough up suspects. 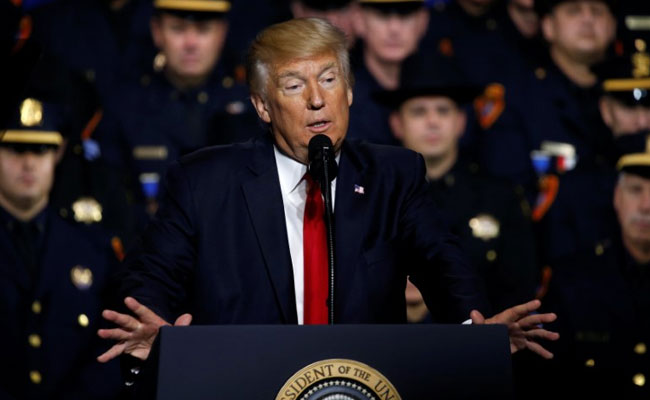 Policing in the US has rebuffed Donald Trumps call to rough up suspects. Officers can stop protecting suspects heads when they lower them into patrol cars, the US President said during a speech to law enforcement officers, who clapped and laughed. But hours after his speech, the International Association of Chiefs of Police (IACP) issued a statement noting that dignity and respect are the bedrock principles” behind “procedural justice and police legitimacy. The IACP added: The ability of law enforcement officers to protect the public, and guard their own safety, the safety of innocent bystanders, and even those suspected or apprehended for criminal activity is very challenging. For these reasons, law enforcement agencies develop policies and procedures, as well as conduct extensive training, to ensure that any use of force is carefully applied and objectively reasonable considering the situation confronted by the officers. Law enforcement officers are trained to treat all individuals, whether they are a complainant, suspect, or defendant, with dignity and respect. This is the bedrock principle behind the concepts of procedural justice and police legitimacy. Mr Trump, speaking in Brentwood, New York, focused on measures to counter violence by a notorious street gang, MS-13. Linking gang violence to immigrant communities, he repeated his administrations commitment to speeding up deportations of illegal immigrants, enforcing immigration laws and building the wall on the Mexican border. When you see these thugs being thrown into the back of a paddy wagon  you just see them thrown in, rough  I said, Please dont be too nice, he said. Like when you guys put somebody in the car and youre protecting their head, you know, the way you put their hand over? Like, dont hit their head and theyve just killed somebody  dont hit their head. I said, You can take the hand away, okay? he added. For years and years, [laws have] been made to protect the criminal, Mr Trump said. Totally protect the criminal, not the officers. You do something wrong, youre in more jeopardy than they are. These laws are stacked against you. Were changing those laws. Mr Trump called MS-13 members animals who have transformed peaceful parks and beautiful quiet neighbourhoods into blood-stained killing fields. The gangs members have allegedly committed 17 murders in Suffolk County since the start of 2016. The police department for Suffolk County, where Mr Trump spoke, wrote on Twitter immediately afterwards that it has strict rules and procedures relating to the handling of prisoners. It added: Violations of those rules are treated extremely seriously. We do not and will not tolerate roughing up of prisoners.” The American Civil Liberties Union (ACLU) posted on Twitter that Mr Trump was urging lawlessness with his speech. Innocent until proven guilty? Our president would rather not bother with that, expanding the role of the police officer to include judge, jury, and executioner said ACLU deputy legal director Jeffery Robinson in a statement. And if the police happen to make a mistake and arrest an innocent person? Well, the pain and humiliation they endure is just a small price to pay for our return to being tough on crime. Just remember which communities will pay. This country is weary of the type of policing that Trump espouses, having seen over and over again that it only makes it harder for police to investigate and solve crime.” “We must increase the trust between police and civilians, not decimate it. Several Suffolk County police officers were charged last year and accused of assaulting a suspect after he was arrested in 2012. In November, a week before Trump was elected, the former Suffolk County policing chief was sentenced to 46 months in prison after pleading guilty to a federal civil rights offence and conspiring to obstruct justice; authorities said he beat a man handcuffed and in police custody. Last month, the US Just