Chief officers, police and crime commissioners (PCCs) and England`s children`s commissioner have backed calls for new legislation to pardon sexual abuse victims who broke the law while being groomed. 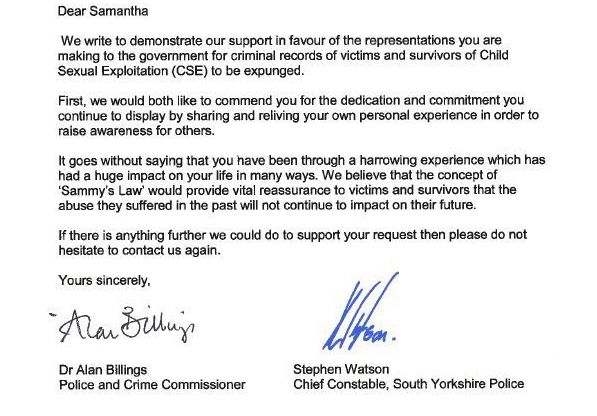 Chief officers, police and crime commissioners (PCCs) and England`s children`s commissioner have backed calls for new legislation to pardon sexual abuse victims who broke the law while being groomed. All have joined a campaign to support a Rotherham abuse survivor`s attempts to absolve teenage girls of the crimes they were forced to carry out by their abuser. Sammy Woodhouse, who was 14 when she was targeted by the Rotherham ringleader, was one of 1,400 children abused between 1997 and 2013 who went on to commit a series of offences during her ordeal for which she received a criminal record. She has waived her right to anonymity to campaign for other victims and has now written to Home Secretary Amber Rudd requesting a royal pardon for other young victims who were lured into crime at the influence of their abusers. Ms Woodhouse said the fear of being prosecuted was stopping victims coming forward and preventing survivors from moving on with their lives. In her letter to the Home Secretary, she added: I feel, until this is done, I and others will continue to be being blamed for the horrendous and traumatic experiences we endured as children. This cannot be right. Senior figures including the chief constables and PCCs of South Yorkshire and Bedfordshire forces, the director of childrens services at Rotherham Borough Council, and Englands Childrens Commissioner Anne Longfield, have now backed Ms Woodhouses campaign for a `Sammys Law`. Bedfordshire Police Chief Constable Jon Boutcher, in supporting moves for a change in the law, said: Sammys story is very powerful  she is the victim in this; she is not the offender. If we get more victims coming forward  so that officers can go after those offenders, and get the evidence against them to put them behind bars  then that works for me. If this was a member of my family, or this was someone who I knew, I would hope common sense would prevail.” In a joint letter pledging support, South Yorkshire Police Chief Constable Stephen Watson and PCC Dr Alan Billings said: The lives of these victims and survivors have already been damaged in such horrific ways. “Many of them will have made decisions and not acted within the law, during the time that they were being groomed and abused as vulnerable teenagers. I commend Samantha for her bravery, in not only waiving her anonymity, but also using her experiences as a platform to help others. “Those affected want to put their ordeal behind them and move on with their lives. Unfortunately criminal records mean this is not easy for them. Commenting on the campaign, Nottinghamshire PCC Paddy Tipping said it was vital that victims of abuse gain the full trust of the organisations whose job it is to protect them from harm. He added: “Removing the fear of prosecution or criminal charges for those victims forced to commit crime by their abusers will encourage many more survivors to come forward instead of suffering in silence which is crucial for their future safety. Sammys Law will send a clear message to victims of abuse that they are not responsible or to blame for the horrific ordeals they have faced and will also help to prevent abusers from using this sickening strategy as a further means of controlling their victim.” Ms Longfield said the rule change would make a huge difference to vulnerable young people who are trying to rebuild their lives. And the Home Office said Ms Woodhouse was a victim of vile abuse and she has shown tremendous strength and courage in speaking out. It said it would consider her case and respond to her directly. Last year, eight men who sexually abused three teenage girls in the town between 1999 and 2003, were jailed at Sheffield Crown Court after being convicted of 16 charges including rape, false imprisonment and indecent assault. The judge said their victims had been “targeted, sexualised and subjected to degrading and violent acts.” This week a dozen men were charged with 44 child sexual abuse offences in Rotherham dating b