German police have been accused of making a fool of themselves in their handling of the G20 summit riots over the weekend. 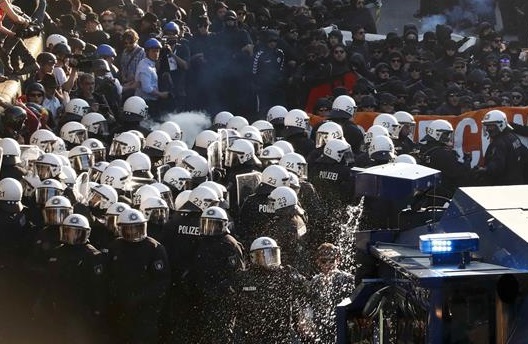 German police have been accused of making a fool of themselves in their handling of the G20 summit riots over the weekend. Violent clashes with anti-globalisation protesters erupted as leaders from the world`s 20 most developed and emerging economies held a two-day meeting focusing on terrorism, trade, climate change and other key global issues. Some 476 officers were injured in a deployment of more than 20,000, and 186 people were detained in custody out of more than 300 original arrests, Hartmut Dudde, the head of operations for Hamburg Police confirmed on Monday (July 10). Over the course of three days, so-called bloc anarchist burnt cars, looted shops, erected street barricades and fought pitched battles with police in several Hamburg neighbourhoods. Mr Dudde admitted that, despite 18 months of preparation, security forces had been “surprised” by the extent of the violence. But the Association of German Criminal Officers (BDK) criticised the security concept for the summit, complaining it “simply did not work. BDK chair André Schulz added: We have made a fool of ourselves. The German police officers` union GdP hit out at so-called bloc anarchists, accusing them of “hijacking peaceful demonstrations by tens of thousands of people to deliberately attack” officers. City mayor Olaf Scholz thanked the “heroic” police for their service, before dismissing criticism by some peaceful demonstrators that officers had been excessive in what he called “the biggest police operation in the post-war period”. German Interior Minister Thomas de Maiziere said the hardcore of rioters could “not claim any political motives” but were “despicable violent extremists, just like neo-Nazis and Islamist terrorists”, adding: These weren`t demonstrators. These were criminal anarchists. The explosion of violence at the meeting on Friday (July 7) and Saturday (July 8) had sparked pointed questions over how Hamburg could descend into “mob rule” and why German Chancellor Angela Merkel chose a hotbed of leftist militancy as the venue.