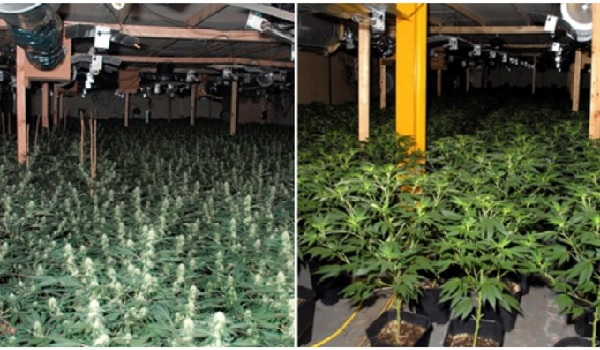 Six people in a very large criminal enterprise involving producing thousands of cannabis plants at three sites straddling two counties have been jailed for nearly 20 years. Officers discovered the operation in a warehouse in Brackmills, Northampton, on October 13, 2014, after concerns were raised by members of the public. A total of 3,400 cannabis plants in various stages of growth were inside the unit, and a second factory containing 2,500 plants was found in Gainsborough, Lincolnshire. A further 300 were uncovered in a raid at a property in Northampton in June 2015. It is estimated that the factories would have generated around £10 million a year had they continued to operate. Northamptonshire Police said the group were using forged documents to rent the units from unsuspecting landlords. On Thursday (September 26), Dinesh Khetani, 33, from Brent in north-west London, and Peter Brown, 28, from Stanford-le-Hope in Essex, were found guilty of conspiracy to produce cannabis, and sentenced to six years in prison. Kye Nixon, 27, from Hoo in Kent, and 27-year-old Warren Willsher, from East Ham, east London, both pleaded guilty to the same offence and were imprisoned for three years and four months. Nicola Bowers, 29, from Standford-le-Hope, pleaded guilty to money laundering. She was sentenced to four months in prison suspended for two years, and ordered to carry out 120 hours of unpaid work. A sixth defendant, Duong Tuan Nguyen, 21, from Durham, pleaded guilty to conspiracy to produce cannabis and is due to be sentenced on October 5. Detective Constable Alex OMeara, from the Serious and Organised Crime Team, said: This was a very large criminal enterprise that was capable of producing a vast quantity of cannabis. Those involved travelled considerable distances to commit their crimes in an attempt to avoid detection. This case is a stark reminder that county borders are no longer a barrier to police investigations. It can be easy to dismiss cannabis production as a victimless crime, however, drug production is the first step towards more serious violent offences being committed in our neighbourhoods. More than £50,000 was paid by the group to rent the industrial units and police seized a further £60,000 in cash during searches of the defendants home addresses.