A 74-year-old man with a fascination for guns has been jailed for five years after a fire at his home revealed his secret stash of more than 150 firearms. 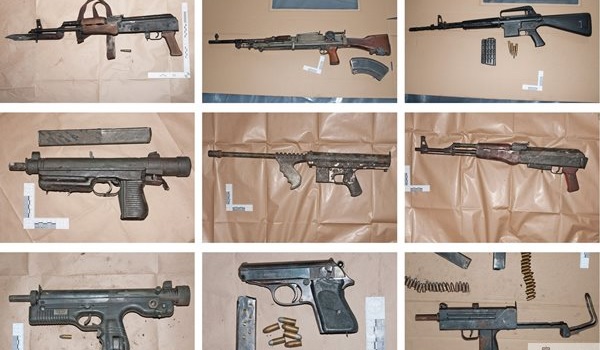 A 74-year-old man with a fascination for guns has been jailed for five years after a fire at his home revealed his secret stash of more than 150 firearms. Around 160 weapons  some of which were loaded  including sub-machine guns and assault rifles were discovered by firefighters in a basement and top floor room at Paul Bushells home in Gillingham on May 7. Bushell and his wife were at a 70th birthday lunch for a friend when they were told their house was ablaze. Kent Police searched the property for four days and none of the firearms were locked away in cabinets or kept in a secure area. He also had 136 cartridges of ammunition. Although Maidstone Crown Court heard he was fascinated with the weapons and did not have any criminal intent, Judge Philip Statman said the haul posed a significant risk to the community. Kent Police said the consequences could have been catastrophic if the weapons had fallen into the hands of criminals. Bushell hid the guns from his wife, who was not allowed to enter certain rooms of the house, the court was told. Judge Statman told Bushell he would not go over and above ” the minimum sentence because Bushells mitigation was of considerable significance. It is not suggested you have criminal links with the underworld, nor is it suggested that you have acted as an armourer. For around 50 years, you have been fascinated by guns, he added. “You, more than anyone, know of the danger of weapons of this kind, and the destruction they could cause should they fall into the hands of criminals. “You knew what the law said. You chose to ignore the law. You posed at your home address a very considerable risk to the community as a whole. “I have no hesitation in indicating this is a case where the minimum sentence must apply. I take the view a sentence of five years imprisonment serves the justice of this case and reflects properly the way the Crown has proceeded against you.” Bushell admitted seven counts of possessing a prohibited weapon and six of possessing ammunition without a firearm certificate, and was sentenced to five years in prison on Wednesday (November 15). A Kent Police spokesperson said: “A large number of guns discovered were loaded and ready to fire with others having been deactivated professionally and then reactivated unprofessionally.” Sarah Dineley from the Crown Prosecution Service added: “These weapons were not locked away and were kept loaded in a house that children visited regularly. “The possible consequences were obvious and serious. Had the property been burgled, they could have easily fallen into the hands of criminals. “They also posed a serious risk to the firefighters who attended the home, given the weapons were recovered from inside the fire-damaged room.”