Officers at Thames Valley have been testing specially equipped PDAs that can directly access the Police National Computer.

Officers at Thames Valley have been testing specially equipped PDAs that can directly access the Police National Computer.

The PDA devices have been on trial with 70 officers from across the force in order to test the capability of the technology. After the success of this stage of the trial the Police Authority has authorised that the project be rolled out across Oxford, bringing the total number of users up to 350 in another six month trial.

Officers from Oxford will begin training with the devices in February 2006 for a period of ten weeks and it is expected for them to be fully trained by April in order for the next stage of the trial to commence.

Using the device, officers can access their email, calendar and duties remotely. In addition, a range of police systems and databases can be checked such as the PNC databases of people and vehicles, and voters register. Officers no longer need to go into

a station to read their emails, which are becoming an increasingly important means of communication, and can perform a range of intelligence checks without the need to radio the force PNC Bureau.

The software was dev-eloped in partnership with Microsoft who had a software developer based at Thames Valleys headquarters working with officers and project leaders to tailor build a secure and efficient system. There are already plans for a range of other systems to be made available to officers using the PDAs such as access to the Forcewide missing person database and also the Streetcraft system.

Currently the devices make use of GPRS (General Packet Radio Signal) to send and receive data; however the project developers are currently investigating the use of 3G technologies which, with its increased bandwidth would allow faster operating speeds and a wider range of uses. 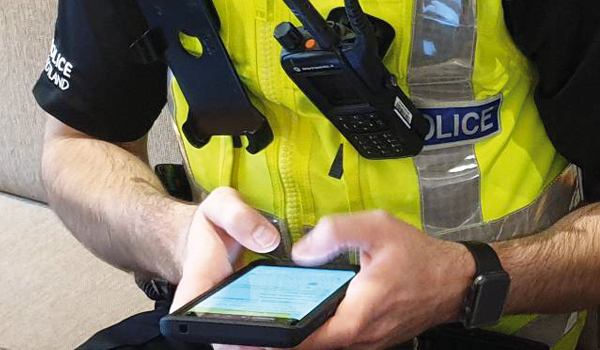