PCs who brought down MP`s killer nominated for more awards

Two unarmed officers who rugby tackled the murderer of Jo Cox have been nominated for a national Police Bravery Award. 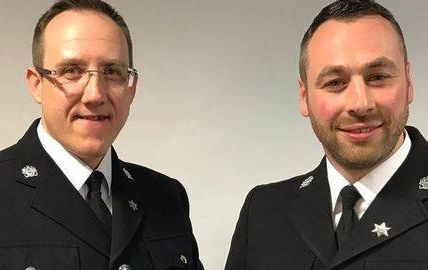 Two unarmed officers who rugby tackled the murderer of Jo Cox have been nominated for a national Police Bravery Award. Police Constables Craig Nicholls and Jonathan Wright brought down Thomas Mair after he had shot and stabbed the MP for Batley and Spen outside Birstall Library in June last year. They were on routine patrol when they heard about the attack and drove to where the offender had last been seen. The pair spotted a man who took evasive action to avoid being seen so they followed him and made the arrest, even though they realised he was still likely to have a loaded gun and a knife. The Police Federation of England and Wales said the officers saw Mair drop a bag and made a motion to grab something from his waistband. Fearing it was a weapon, they both ran at him and tackled him to the ground. The PCs have already been honoured with a Queens Gallantry Medal, received a Chief Constables Commendation and won West Yorkshire Polices Brave Officer Award. Nick Smart, chairman of West Yorkshire Police Federation, said: This was an extraordinary act of bravery as both officers, no doubt under extreme pressure and fear, acted and prevented the suspect from committing any further acts of extreme violence. The officers primary concern was not for their own safety but the fact that there were numerous members of public on the street going about their normal daily business who were potentially in life-threatening danger.