The chief constable of Cheshire Constabulary has been suspended from official duties after the police and crime commissioner (PCC) said he has a case to answer for gross misconduct and will face a hearing to decide his future. 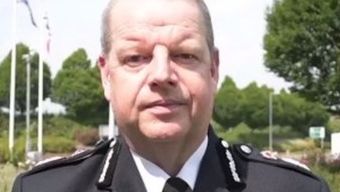 The chief constable of Cheshire Constabulary has been suspended from official duties after the police and crime commissioner (PCC) said he has a case to answer for gross misconduct and will face a hearing to decide his future. Cheshire PCC David Keane took the decision to relieve Simon Byrne of his duties after considering the contents of an external force`s investigation report. The announcement came eight months after Mr Keane  following advice from the Independent Police Complaints` Commission (IPCC)  ordered an independent inquiry into claims surrounding Mr Byrne that surfaced in December last year. The nature of the allegations has never been disclosed but are believed to involve his treatment of a fellow officer. In a statement on Wednesday (August 23), Mr Keane said that having “carefully considered” the investigation report on the chief constable, there is “a case to answer” for gross misconduct with regards to authority, respect and courtesy and discreditable conduct. He has referred the proceedings to an independently-chaired gross misconduct hearing. Mr Keane added: “I will not be making any further comment on the matter at this time in order to preserve the integrity of the on-going process.” Deputy Chief Constable Janette McCormick has been asked to step into the role of Acting Chief Constable until after the hearing. At the time the matter was referred to the external force by the IPCC, Mr Byrne said: I am aware that an allegation about my conduct is being investigated by the police and crime commissioner for Cheshire, in accordance with normal policy and procedure. “I do not know the detail of the allegation so am unable to make any further comment at the moment. In the meantime, I remain focused on my work in keeping Cheshire safe and fulfilling my national responsibilities. Mr Byrne took over the reins of Cheshire Constabulary in June 2014. The married father-of-two came to the force from his role as Assistant Commissioner of the Metropolitan Police Service, where he was responsible for 32 London boroughs. He unsuccessfully applied for the role of MPS commissioner earlier this year. He has held a number of senior policing roles including Assistant Chief Constable for Merseyside Police and Deputy Chief Constable of Greater Manchester Police.