Former officers have criticised a police and crime commissioner (PCC) who chose to wear a police-style uniform on patrol. 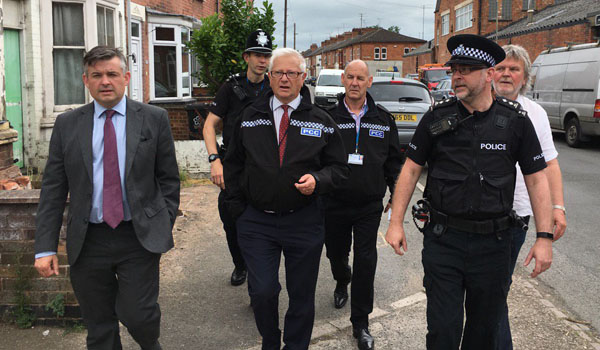 Former officers have criticised a police and crime commissioner (PCC) who chose to wear a police-style uniform on patrol. Leicestershire PCC Lord Willy Bach was pictured wearing a jacket with black and white check while on patch walk with sergeants in Saffron Ward. Although the outfit had a badge saying PCC on the chest and the back, Lord Bach was accused of wearing something too similar to traditional police uniforms. His policy advisor, Andy Furlong, also wore the jacket. Comparisons were drawn with HM Chief Inspector of Constabulary Sir Tom Winsors decision to wear a ceremonial uniform to the 2013 National Police Memorial Day Service despite never having served as an officer. Andy Wright said: This is akin to Winsors massive mistake in wearing a police costume! He finally saw sense. Your two people need to do the same. Martin Palmer said: This man is NOT a police officer so why is he wearing a police uniform? Get a fleece with PCC on it instead. Lord Bach said the jacket was originally purchased to wear at public engagement events to make him easily identifiable to the public. He added: I wore it on the patch walk for the same reasons. With the size of the lettering saying police and crime commissioner I dont think anyone could make a mistake about my identity. I am aware some people have commented about me wearing it last week and that is entirely their prerogative, on other occasions it has been welcomed by those wishing to talk to me.