The four ringleaders behind the “largest burglary in English legal history” have been ordered to pay £27.5 million or see their prison sentences increased by seven years apiece, a judge has ruled. 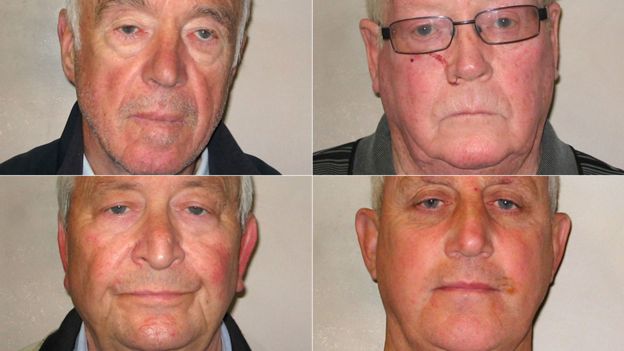 The four ringleaders behind the “largest burglary in English legal history” have been ordered to pay £27.5 million or see their prison sentences increased by seven years apiece, a judge has ruled. Hatton Garden gang members John Kenny Collins, 77, Daniel Jones, 63, Terry Perkins, 69, and Brian Reader, 78, were each told to find sums varying between £6.4million and £7.6million at a Proceeds of Crime Act confiscation hearing at Woolwich Crown Court. The gang ransacked 73 boxes after drilling a hole in the wall of a vault at Hatton Garden Safe Deposit in Londons jewellery quarter over Easter 2015. Judge Christopher Kinch QC said the men jointly benefitted from an estimated £13.7 million worth of stolen cash, gold and gems. He ruled they must pay £27.5 million based on their available assets. If they fail to pay their share of the total sum, they will have seven years added to their jail sentences. It means some of the gang members, who are unwell, could die behind bars. Speaking at the confiscation hearing on Tuesday (January 30), Judge Kinch said: “A number of these defendants are not only of a certain age but have in some cases serious health problems. “But as a matter of principle and policy it is very difficult to endorse any approach that there is a particular treatment for someone who chooses to go out and commit offences at the advanced stage of their lives that some of these defendants were.” Collins`s share is £7,686,039, which was imposed after the court heard he has assets in “liquid form” and property both in the UK and abroad. Perkins, who has been diagnosed with “severe heart failure”, must pay £6,526,571. His barrister told the court he would have to sell his flat in Portugal but will serve the default sentence as he had “no prospect of any further funds”. Jones must pay £6,649,827. He too will serve the default time, as he claimed he only has cash in his bank and no further assets. Reader, who did not appear in court, was ordered to pay £6,644,951, which will include the sale of his £639,800 home and land he owns, worth £533,000. His lawyer said the sentence does not have to be long for it to mean “in reality, he will serve the rest of his life in custody”. Plumber Hugh Doyle was ordered to pay £367.50 for his “general criminal conduct” in the Hatton Garden raid. Doyle was convicted in January 2016 for providing safe access to a yard where the stolen property was moved between vehicles. The judge who delivered the ruling agreed Doyle had not benefited himself from the raid but deemed him to have a “criminal lifestyle”. Doyle had around £27,000 in his bank account which was unaccounted for, which the judge said was from the proceeds of general criminal conduct. Although the exact value of the stolen goods has fluctuated throughout the trial, the Metropolitan Police Service only recovered around £4 million worth. Some of that was recovered in a graveyard in Edmonton. Collins, Jones and Perkins are each serving seven-year sentences, while Reader is serving six years and three months, for their roles in the notorious burglary which was turned into a film starring Larry Lamb and Phil Daniels and released in 2017. MPS Detective Chief Inspector Mark Bedford said: “These defendants were responsible for one of the biggest safety deposit centre heists in British history, but, after a meticulous Flying Squad investigation, they were caught, tried and subsequently given lengthy custodial sentences. However, this was not the end of the investigation; specialist financial investigators from the Met`s criminal finance team have been working with the Flying Squad to locate the outstanding property and identified the assets of these defendants. This thorough investigation in partnership with the Crown Prosecution Service has resulted in these Proceeds of Crime orders which will ensure the defendants are prevented from enjoying any financial benefit from this audacious burglary and demonstrates the Mets de