French police have detained a man after a shoot-out on a motorway in their pursuit of a suspected terrorist who earlier rammed into soldiers, leaving six injured. 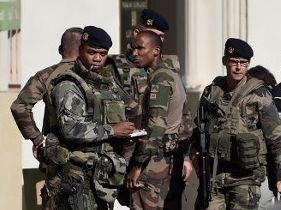 French police have detained a man after a shoot-out on a motorway in their pursuit of a suspected terrorist who earlier rammed into soldiers, leaving six injured. Officers gave chase to a BMW which fled the scene after it ploughed into security forces close to the headquarters of Frances anti-terrorist police unit in the Paris suburb of Levallois-Perret on Wednesday morning (August 9). The suspect, thought to be 37, was eventually intercepted on the A16 motorway north of the French capital driving towards the port of Calais. He was reportedly hit by five bullets in what was described as a “violent arrest”. A Lille police officer was injured by stray gunfire during the arrest, said a spokesperson for the Paris prosecutors office who confirmed an investigation has been launched into “attempted killings… in relation to a terrorist undertaking”. France`s counter terror unit is investigating the attack. All six soldiers were taken to hospital, but none have life-threatening injuries. Interior Minister Gerard Collomb said the attack was a “deliberate act.” “The car accelerated towards the soldiers for five metres in order to hit them,” he added. “We do not believe this could be an accident.” Mayor of Levallois-Perret, Patrick Balkany, said the suspect`s vehicle was “pre-positioned” in a small alleyway, waiting for troops from the 35th Infantry Regiment to come out of the building. The group of soldiers are part of France`s Operation Sentinelle, set up in the aftermath of the Charlie Hebdo terror attack in January 2015. Levallois-Perret  a quiet and affluent neighbourhood  is home to the headquarters of the DCRI, France`s counter intelligence agency. TIMELINE ON PARIS TERROR  In the bloodiest attack targeting France, 130 people were killed in a wave of shootings and bombings in Paris on November 13, 2015, in carnage claimed by the so-called Islamic State (Daesh);  In January 2015, two brothers who had vowed allegiance to Al-Qaeda gunned down 12 people at satirical weekly Charlie Hebdo in Paris;  This is the sixth incident to affect French security forces in 2017 alone;  In February, a man armed with a machete attacked four soldiers on patrol at Paris` Louvre Museum, while in April another extremist shot and killed a police officer on the Champs Elysees;  In June, a 40-year-old Algerian doctorate student who had pledged allegiance to Daesh attacked a police officer with a hammer outside Notre Dame cathedral.  An 18-year-old with a history of psychological problems was arrested on Saturday (August 5) at the Eiffel Tower after brandishing a knife and shouting “Allahu Akbar” (God is Greatest).