Operation surrounding Queen’s death and funeral ‘policing at its best’

Chief Constable Lucy D’Orsi said she was “proud” of the “deep compassion, pride and professionalism” of officers and staff during the largest ever ceremonial operation for the funeral and national mourning period of Queen Elizabeth II. 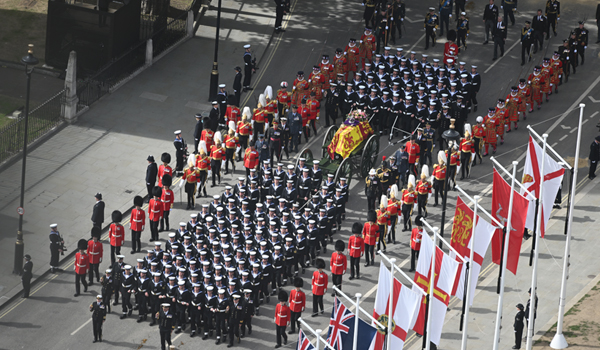 The State Gun Carriage carrying the coffin of Queen Elizabeth II, draped in the Royal Standard with the Imperial State Crown and the Sovereign's orb and sceptre, as it leaves Westminster Abbey after the State Funeral. Picture: UK Parliament/Jessica Taylor/PA Media

The British Transport Police chief constable, Gold commander for Operation London Bridge, said the “scale and complexity of this operation was incredible”.

More than 5,000 police officers from across the UK supported ten days of ceremonial events to mark the death of Queen Elizabeth II and the accession of His Majesty King Charles III, ensuring security and that the public could pay their respects safely.

The number of officers drafted in to support events in Scotland, London, Windsor and Norfolk would equate to assembling the fifth largest police force in England and Wales, with additional tens of thousands of officers supporting events locally, said the National Police Chiefs’ Council (NPCC).

The day of the funeral itself was the largest ever policing operation for the Metropolitan Police Service (MPS), beating the opening and closing ceremonies for the London Olympics in 2012.

Home Secretary Suella Braverman praised the operation as “policing at its best”.

Ms D’Orsi said: “I would like to thank all the police officers, staff and volunteers from across the UK who came together to ensure that the nation was able to pay their respects to Her Majesty the Queen safely and securely.

“Thank you too to the public who understood the extra security measures in place for such an occasion and supported police officers, staff and volunteers in their duties.

“The scale and complexity of this operation was incredible. I was proud to see UK policing come together to keep the public safe and ensure the operation ran smoothly. Throughout it all, police officers and staff involved showed deep compassion, pride and professionalism.

“The deployment of specialist officers and capabilities was crucial with movement of thousands of officers from across the UK to Scotland, London and Windsor. Throughout daily policing continued.”

Police Scotland, the MPS, Thames Valley Police, Norfolk Consabulary and British Transport Police all led operations. They were supported by police officers and staff from 47 police services from across the UK as well as British Overseas Territories including Anguilla, Monserrat, Bermuda, Cayman Islands, Gibraltar, the Sovereign Bases in Cyprus, the British Virgin Islands, the Falkland Islands, the Channel Islands (Jersey, Guernsey) and Isle of Man.

More than 2,600 uniformed officers were out and about ensuring security and engaging and helping the public.

Thousands of specialist teams were also called upon to assist the key forces involved in either the transportation of The Queen’s coffin or where crowds of mourners were expected outside Royal Households, while officers in Wales and Northern Ireland contributed to the policing of visits by King Charles III, which saw huge crowds and additional security demands.

Around 650 armed protection officers, armed firearms officers and armed response vehicles were sent out over the ten days with more than 500 specialist search teams trained to scour key landmarks and buildings where crowds gathered.

More than 50 police dogs trained in explosives and firearms detection were also deployed.

Specialist search teams carried out searches of phone boxes, drains, bins and other items, whilst also conducting searches and screening of people travelling to venues to pay their respects. These included search arches being put in place in addition to the strict search regimes carried out by officers.

“There were search dogs, police mounted section and armed response officers patrolling town and city centres as part of many visible and not so visible security measures in place, engaging with the public and providing security and safety information,” said the NPCC.

“Specialist protection teams ensured the safety of hundreds of world leaders, heads of state, foreign dignitaries and their own entourages.

The NPCC said during the mourning period Counter Terrorism Policing received more than 800 reports from the public.

The Home Secretary said: “I would like to thank the many police officers, staff and volunteers who have worked around the clock to ensure the British public could safely pay their respects to Her Majesty Queen Elizabeth II.

“This was the largest ever ceremonial policing operation, seeing thousands of officers deployed from forces across the United Kingdom to manage and oversee this unparalleled event, including ensuring the safety of the Royal Family and foreign dignitaries during the State Funeral.

“I have seen first-hand the professionalism, dedication and skill of officers, who should be immensely proud of their work.

“At a time of national sadness and reflection, we can all be united in our pride for the men and women who have helped ensure this most momentous occasion in our country’s history happened successfully and peacefully – this is policing at its best.”