A force has defended its decision to allow uniformed officers to march for the first time in a gay pride parade as support for a community that suffers a “disproportionate” number of hate crime attacks. 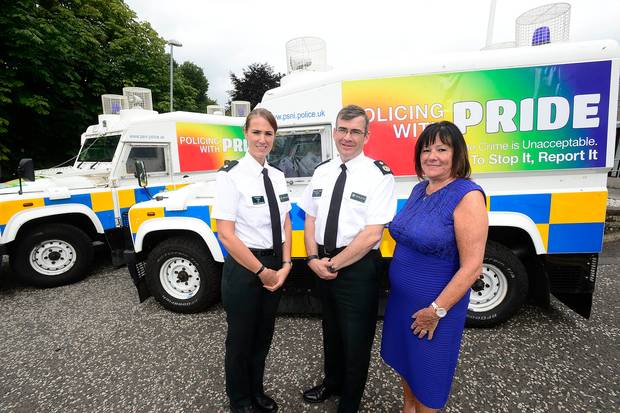 A force has defended its decision to allow uniformed officers to march for the first time in a gay pride parade as support for a community that suffers a “disproportionate” number of hate crime attacks. Deputy Chief Constable Drew Harris insisted the Police Service of Northern Ireland`s (PSNI`s) neutrality would not be compromised by taking part in an event where other participants were demanding “societal change”. Belfast Pride actively promotes a campaign to introduce same-sex marriage in Northern Ireland  the only part of the UK and Ireland where it remains outside the law. Mr Harris stressed that PSNI officers have participated in the annual festival  which runs until Sunday (August 6)  for many years but the force`s latest move reflected the diversity of the police service`s workforce. The decision comes amid increased scrutiny on LGBT issues in Northern Ireland following the DUP`s `confidence and supply` deal with Theresa May`s Conservative Government. Mr Harris said: “The Police Service of Northern Ireland sees this as an opportunity not only to show support for these members of our communities, but also to highlight that hate crime, in whatever form, is wrong and the importance of reporting it. “Hate crime should not be tolerated and victims should be encouraged and feel confident that when they contact police that their concerns will be taken seriously and responded to appropriately.” But he added: “We are a politically neutral organisation. “Just step back from the narrow point about the societal change that some element of the gay pride event wishes to promote. “We are there, one, to assure that community of our protection in terms of hate crime and also to be a representative workplace.” Three PSNI Land Rovers, which have been liveried up with anti-hate crime messages, will be operational throughout the ten-day festival, and will also be used at Pride events in Newry and Londonderry. The PSNI has spelt out its message against a rainbow-coloured backdrop: `Policing with Pride – Hate Crime is Unacceptable – To Stop It, Report It.` Northern Ireland Policing Board chair Anne Connolly said the board was delighted to support the message of the PSNI during Belfast Pride that any sort of hate crime was wrong. “It`s a very sad reality that homophobic and transphobic hate crime continues to be committed in our society,” she said. “This is not an issue for the police alone to deal with, but as they are often the first point of contact, the message and service provided by the PSNI is critical. “I welcome the fact that officers will be parading at Pride in their uniform for the first time ever, demonstrating the diversity among PSNI officers and staff and PSNI support for lesbian, gay, bisexual and/or transgender people across our community.” Ireland`s new Taoiseach Leo Varadkar, who revealed he is gay ahead of the 2015 referendum in the republic, has confirmed he will attend a pride breakfast in Belfast on Saturday (August 5), in what will be his first visit to the province as the Fine Gael leader. After succeeding Enda Kenny in June, Mr Varadkar said: “I pledge as Taoiseach to use my office, for as long as I hold it, to advance the cause of LGBT rights, to press for marriage equality across Ireland, to speak up for LGBT rights around the world where they are under attack, and to push for the implementation of the sexual health strategy here at home at a time when it is more important than ever. “I don`t think my election as Taoiseach actually made history, it just reflected it, reflected the enormous changes that had already occurred in our country.”