Officers to be trained to identify ‘subtle signs’ of domestic abuse

The Metropolitan Police Service (MPS) is to train 8,000 frontline officers to spot the “subtle” signs of domestic abuse and how best to identify and gather evidence. 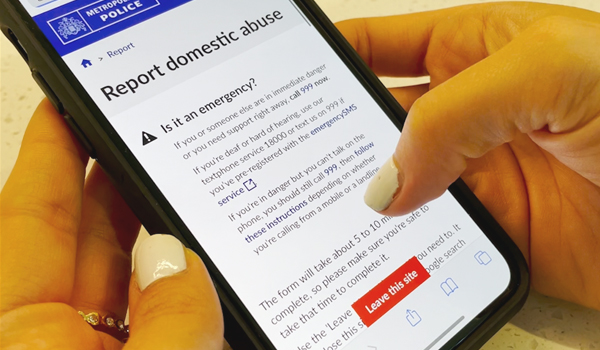 Alongside the training, the force has also launched a new online reporting system as it enhances its response and support to victims of domestic abuse across London.

The MPS said domestic abuse is one of the most “complex and largest risk areas” it deals with.

It has now adopted the Domestic Abuse Matters cultural change programme, in collaboration with the charity SafeLives. Former officers and domestic abuse practitioners will work together to train frontline officers to ensure they can identify and gather evidence of coercive controlling behaviour, recognise perpetrator tactics and understand the dynamics of domestic abuse.

The programme, which is being funded by the Mayor of London, has been linked to a 41 per cent increase in arrests for controlling and coercive behaviour across other ‘adopter’ forces.

It was designed for the College of Policing by domestic abuse charity SafeLives and other stakeholders to “transform the response to domestic abuse, ensuring the victim’s voice is prioritised”.

Detective Superintendent Matthew Pilch, the MPS’s lead response officer for domestic abuse, said: “I am delighted that we are able to roll out this training across the Met to our key frontline officers who are the first to attend domestic abuse calls across the capital.

“We are developing the ability of our officers to spot subtle signs, behaviour and traits of all forms of domestic abuse. It is key that we understand signs of coercive and controlling behaviour, how best to identify and gather evidence of domestic abuse, challenge victim blaming and help them to recognise the signs of manipulation used by perpetrators.”

He said coercive controlling behaviour can be a single act or pattern of threats, humiliation, intimidation or other abuse used to harm, punish, or frighten a victim. It is typically used to create subordination or dependency by isolating the individual from support – victims are often exploited for personal gain, and are deprived of the means to live independently or escape.

Det Supt Pilch added: “The new online reporting tool is also a huge step forward. It enables those who can’t pick up the phone, who can’t attend a police station or seek help through traditional means to report through a safe, secure and specially designed system. I hope this encourages and enables anyone in fear to seek help. Everyone has a right to feel safe at home, and we have a vital part to play in ensuring that is the case.”

Figures from the NCDV show that when the national team plays, domestic violence in England increases by 26 per cent. If the team loses, the figure is even higher as crimes surge by 38 per cent.

The NCDV said that after England’s defeat “the ugly side of football culture will have had a lasting impact on some families and many in that position don’t know where to turn or feel unable to ask for the help they need”.

The MPS says offenders are often a partner and may be the parent of their children, so the victim could be fearful about what calling for help may mean for the children. Similarly victims may have concerns about finance or housing.

It says its new “bespoke’ online reporting system” has been designed with the safety of the victim as a priority.

“It has an easily accessible button allowing someone reporting to leave the site quickly if they are disturbed,” said the MPS. “To mitigate any potential risk, the victim will not automatically receive a copy of the form.”

London’s Deputy Mayor for Policing and Crime, Sophie Linden, said: “It is vital that victims reporting abuse have the trust and confidence that the police will support them, and take their allegations seriously. It’s really important we give our officers the tools to support victims and that’s why City Hall has invested £700,000 in Domestic Abuse Matters training for Metropolitan Police officers, to help improve the response given to domestic abuse victims.

“This important training aims to increase officers’ knowledge of coercive control, the experiences of male and LGBTQ+ victims, and challenge victim-blaming and stereotypes. It will help frontline police officers, who are the first responders, to spot the early signs of domestic abuse, better understand the tactics used by perpetrators, and ensure victims’ safety.”

“We know that the Met becoming an adopter force of Domestic Abuse Matters will be welcome news for victims and survivors of domestic abuse, as the programme is designed to increase awareness and understanding of coercive and controlling behaviour and create attitudinal change throughout the entire force,” he said.

“Independent research carried out by Professor Iain Brennan shows the positive and sustained impact of the programme – Domestic Abuse Matters was associated with a 41 per cent increase in arrests for controlling and coercive behaviour for adopter forces compared to forces who have not yet adopted the programme.

“Londoners and police officers alike want to know that the criminal justice response to domestic abuse is as good as it can be. The Met adopting Domestic Abuse Matters is an important step towards that.”

Mr Williams said that in the training, officers will discuss different types of behaviour, all of which amount to abuse, for example, if the perpetrator has taken control of the victim’s phone, prevented them from leaving home or forced them to reveal their location at all times – even to the extent of being made to wear a monitoring device. Perpetrators may isolate victims from support and access to friends and family, resulting in victims sometimes withdrawing from the world around them.

He added that the training will also help to reassure victims that if they call for help, they will receive an empathetic response from the police who will understand why it is important that all their issues, including those around housing, mental health and support for children, should be addressed, alongside referral to specialist domestic abuse services.

Mr Williams said the correct police response for victims of domestic abuse “is vital, and Domestic Abuse Matters equips officers to get it right the first time, every time”.

The latest training follows the launch of Predatory Offender Units across London to identify and arrest the most serious offenders and reduce the risk of repeat offending. The MPS says officers have made more than 1,700 arrests since November 2020.