A drug dealer who stabbed a police officer in the shoulder with a vicious triple-bladed knife during a drugs raid, has been sent to prison for 14 years. 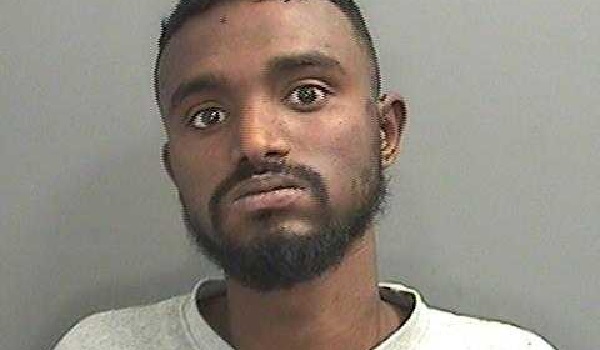 A drug dealer who stabbed a police officer in the shoulder with a vicious triple-bladed knife during a drugs raid, has been sent to prison for 14 years. Abdirahman Hashi, 27, admitted stabbing the officer before elbowing a female detective constable as he attempted to flee. The incident took place at around 10pm on September 19 at an address in Newport Road in Cardiff, while South Wales Police officers were undertaking a search warrant. Cardiff Crown Court heard Detective Constables Graham Budd and Ruth Copeland were keeping watch at the back of the property as other officers forced entry. Hashi ran out of the back door, setting off a security light. Prosecuting, David Pugh said Det Con Budd shouted at the top of his voice: Police. Stop. The drug dealer did not stop, instead lifting an object he was carrying in his right hand to head height before stabbing the officer in the shoulder. He then elbowed Det Con Copeland in the face as he struggled with officers, but he was eventually handcuffed. As the knife Hashi used was held up, Judge Eleri Rees said it was one of the most vicious weapons she had seen in court. It looks particularly extraordinary, I have to say. I do not think I have ever seen anything quite like it before, she added. Mr Pugh said it was not until Det Con Budd felt moisture on his jacket that he realised he had been stabbed, not punched. A paramedic and a doctor attended, and he was driven to A&E at the University Hospital of Wales in Cardiff as there were no ambulances available. He was treated for the wound  believed to be about five inches deep and between four and five centimetres long. Luckily the blade did not go into a nerve or a joint, but did extend towards the chest cavity, Mr Pugh said. The officer has since had cognitive therapy for trauma since the incident, and will attend a rehabilitative centre to receive treatment for physical and psychological harm. In a victim impact statement, Det Con Budd said he has been sleeping erratically since the stabbing, and repeatedly dreams about it. It affects your mental state, your sleep patterns. You get depressed, he added. Youre constantly thinking about it, and think what could I have done about it. Physically I can say that Im healed, but mentally, no. In his police interview, Hashi claimed he thought some boys were trying to get him and did not realise he was attacking a police officer. He also claimed he had only visited the property to buy cannabis, but prosecutors say heroin and crack cocaine worth £300 was recovered from the offender, along with cling film and a dealers list. Sentencing, Judge Rees said: Even though they are police officers and very resilient and brave, that does not mean the traumatic effect of being attacked in this way has not significantly affected each of them. Hashi was sentenced to a 14-year extended sentence, comprising of an 11-year jail term with a three-year extension period. On average, more than nine assaults are recorded per week against officers and staff at South Wales Police, Chief Constable Matt Jukes said. He added: “That also means that each week, an average of 11 officers are absent from work as a result of being assaulted, or recovering from assault-related injuries. “These figures clearly impact on the communities we serve and the subsequent levels of service that are provided.” Divisional Commander for Cardiff, Chief Superintendent Stephen Jones, said: Detective Constable Graham Budd is a highly valued and experienced member of our Cardiff Organised Crime Unit which targets drug supply in the city. He was on duty with colleagues, executing a search warrant, when he was confronted by Hashi who was wielding an extremely large knife with little regard for the consequences. He stabbed Det Con Budd in the shoulder causing a significant wound but it is only a matter of luck that he was not more seriously, or even fatally, injured. This violent assault has greatly impacted on Det Con