Officer saves lorry from bridge fall with his bare hands

A West Yorkshire Police officer has been hailed a hero for rushing to grab hold of a crashed lorry to stop it plunging from an icy motorway bridge with the driver trapped inside. 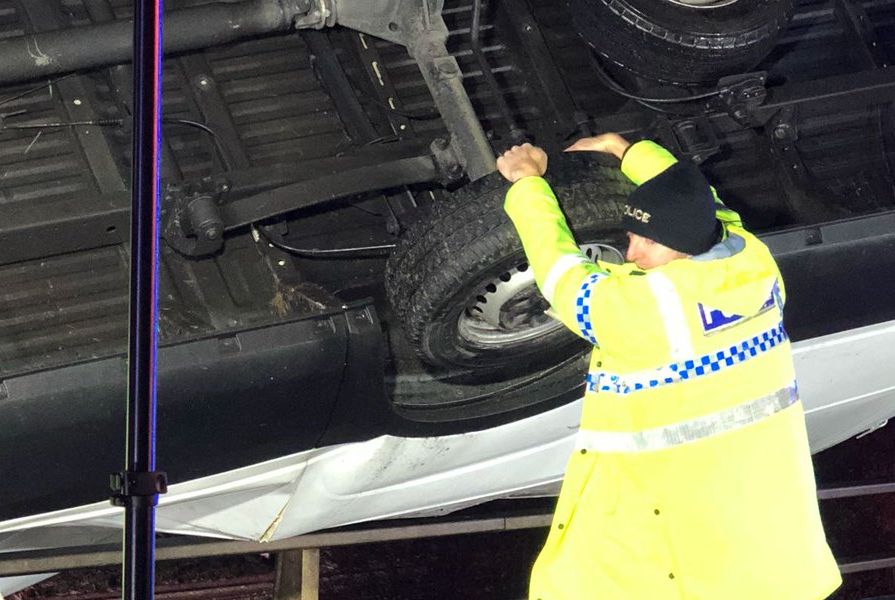 A West Yorkshire Police officer has been hailed a hero for rushing to grab hold of a crashed lorry to stop it plunging from an icy motorway bridge with the driver trapped inside. Police Constable Martin Willis said he was just doing his job as he physically clung onto the truck  stopping it swaying in the wind  until support arrived from the fire and rescue service. PC Willis kept a tight grip on the vehicle, as it teetered on the edge of the A1M embankment in Yorkshire with the injured HGV driver was still inside the cab, for 15 minutes but said it felt a lot longer. The officer posted on Twitter that he couldnt begin to describe [his] relief when firefighters arrived on the scene. PC Willis, with ten years experience as a roads policing officer, was first on the scene near junction 44 on Friday (December 1) to find there had been several separate collisions with one involving an Iveco van which had crashed through the barrier and was left hanging over the bridge. He said: I just saw this van on top of the bridge through the railings and contacted control to say, Ive got to stop here, this looks very serious.`? I walked on the hard shoulder to the incident and I as I did so a lorry driver, who was not involved in the incident, shouted across to say there was a chap upside down in the van.? Every time a lorry went by I could see the van sway and I just thought, Its right over the A64, if this van goes over it will kill the driver.`? Of course youre also thinking any minute now, something is going to come on the hard shoulder and hit me!`  After signalling colleagues to close the road, PC Willis grabbed hold of the vans rear axle to steady it and did his best to reassure the trapped man inside, who had suffered serious leg injuries. I told the victim not to panic and said Were going to get you out of there, whatever you do, dont move`.? I then grabbed hold of the rear wheel and pulled inwards which helped to keep the van balanced.?I was there for a good 15 minutes I think. The victim was eventually rescued by officers from West Yorkshire Fire and Rescue Service who used a winch to stabilise the van and pull it to safety in an operation taking over two hours. The driver inside, a 22-year-old Bolton man, was taken to Leeds General Infirmary where he continues to be treated for serious leg injuries.? PC Willis received a heros response on social media, with onlookers praising his actions and saying he deserved a medal. Responding to one follower who asked how the driver had flipped the vehicle in the first place, he replied: There was a fair bit of snow and ice on the carriagewayis really all I can say. He added: It was quite a scary situation but this is the reality of the job we do.? Sometimes you do have to take risks and if you need to help someone, you need to help them.