The Department for Transport has given the go-ahead for a pilot of new vehicle number plate tracking technology. 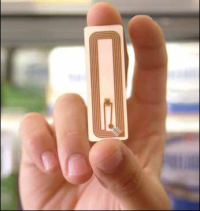 The Department for Transport has given the go-ahead for a pilot of new vehicle number plate tracking technology.

The pilot will see number plates equipped with RFID (Radio Frequency Identification) tags that will allow the vehicle to be easily tracked no matter what its location. The chips will broadcast the vehicles identification number and other data to readers up to 300 feet away. The new number plates will use active tags rather than passive tags, will have built-in batteries to give them a wider broadcast range and can give the number plates 10-year lifespan.

It is hoped the test, to take place later this year, will show whether RFID equipped number plates can be used to effectively combat the increasing use of clone and fake number plates being used to bypass the London congestion charge said Department for Transport spokesman Ian Weller-Skitt.

The issue of privacy is clearly one that will be raised if this technology was to be adopted on a widespread scale. In the US, concerns have already been raised, Its too easy for (RFID number plates) to become a back-door surveillance tool, said Jim Harper, director of information studies at libertarian think tank the Cato Institute and a member of the U.S. Department of Homeland Securitys Data Privacy and Integrity Advisory Committee.

In the US RFID tagging of vehicles is already becoming commonplace. The Department of Homeland Security is already tagging foreign vehicles as they enter the country, and this technology is also being used in unmanned toll booths in the San Francisco Bay Area. However, due to the chips high cost, its unlikely that they will be adopted wholesale by either the US or UK governments in the near future.

PSN benefits for Yorkshire and Humberside