The number of black victims of homicide in England and Wales has climbed to its highest level in nearly two decades, figures show 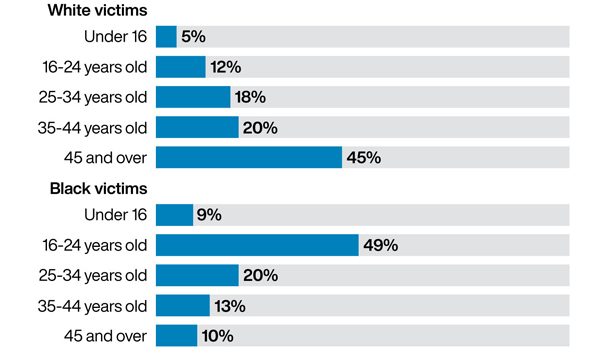 Although the majority of homicide victims in 2019/20 were white, black people continued to record higher rates of victimisation.

In the three years to March 2020, the average homicide rate per million population was around five times higher for black victims than white people, and almost four times higher than other ethnicities.

The figures have been published by the Office for National Statistics (ONS) based on data from the Home Office Homicide Index.

They provide a detailed breakdown of victims recorded by police forces in England and Wales by factors such as age, gender, ethnicity and circumstances.

The ONS said the figures show “clear differences” in the age profile of victims across different ethnic groups.

White victims were the most evenly spread across age groups, which the ONS said may partly reflect the different age distributions of ethnic groups in the population.

There were 275 homicides committed using a knife or other sharp instrument recorded in the year ending March 2020, up six per cent year-on-year and the second highest total since the Homicide Index began in 1946.

Some 75 sharp instrument homicide victims, or just over a quarter (27 per cent), were identified as black, an increase of 15 on the previous year and the highest annual total since 1996/97 when ethnicity started to be recorded on a consistent basis in the Homicide Index.

Overall, the total number of victims of homicide in England and Wales in the year to March 2020 was 695 – 39 of whom were victims of human trafficking whose bodies were found in a lorry in Grays, Essex, in October 2019.

Excluding these victims, the number of homicides increased year-on-year by eight, or one per cent.

The ONS said the incidence rate for homicide remains very low, with 11.7 homicides per million population in 2019/20, a similar rate to the previous three years.